Ben Nevis via the CMD 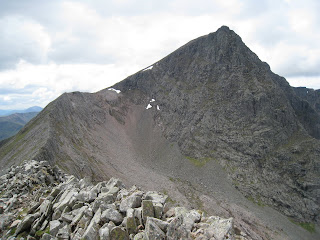 So the idea was to go up to Scotland and walk Ben Nevis, again. But this time I wanted to actually enjoy the walk and views - not that I didn't get enjoyment from walking the 3 Peaks in April but that was a different challenge, for a specific reason and had its own up's and down's.

I decided that I wanted to walk via the CMD Arete, a route that I'd read about numerous times both on-line and in magazines and always said that I'd do - but never actually gotten around to doing anything about it.
So the trip was booked, boots waxed, kit organised and new coat purchased....

On the subject of the coat its worth mentioning that I have somewhat of a love affair with GoreTex for my outerwear. Why? Well I've found over the years that it offers the best in terms of protection, breathability and durability - and I've used a variety of products (socks, coats, trousers, hats, gloves) in a variety of pursuits (mountain biking, road cycling and racing, walking and hiking and wandering around Scout camps showing patrols of scouts how to light fires and put up tents in the rain!) - so I'd say I have given them a fairly good all-round test.

Its worth pointing out that my GoreTex XCR Mountain Biking jacket is still my preferred choice over my Event Jacket (yes, I do have other options but always go back to GTX) and its coming up to 10 years old now!

So when I saw the advert in Cotswold for the new range of GoreTex Active Shell jackets I couldn't resist - that and the fact that, as a Scout Leader, I get 20% off at Cotswold!
I'm not going to spend too long ranting on about the jacket but it is pretty amazing and in all honestly is everything that I expected it to be - breathable, lightweight and very, very waterproof! I've used it walking, cycling, canoeing and just wandering around outdoors in the good old British Summer weather and its great.

Anyway, I digress.  After the flight up to Scotland and the 2 (ish) hour drive up to the Cairngorms I was knackered and apart from a quick wander around a local loch (who's name escapes me) that was about all I had the energy to do.  So it was back to the B&B (http://www.crubenbeghouse.com/) to plan the walk up Ben the next day and pack kit.

Saturday 2nd July 2011
After an amazing breakfast and a quick double check of the kit we headed out for the 40 minute drive across to Ft William and the foot of Ben Nevis.
The last time I walked Ben Nevis was in April this year for the 3 peaks and due to the weather the car park was fairly empty - but when we got there it was totally packed, and it was only 9am!
So we headed off up the main, tourist, path amongst what felt like thousands of other walkers and I have to admit that I really didn't enjoy the first third of the walk.
There isn't really much to describe about the first part of the walk to be honest, apart from the heat (it was sweltering!) and the mass of people - oh and the 5 blokes carrying their bikes up to the top.  Now, its worth pointing out that I've ridden up Snowdon with a mate and it was really good fun, BUT... We left at 5am and were back down by 10am (as per the rules) which meant minimal exposure to people.  The 5 guys on Ben that day had zero chance of actually riding back down due to the number of people - mad. 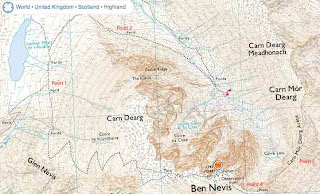 At "Point 1" shown on the map above we left the main path and headed off around Locan Meall an t-Suidhe accompanied by no one else which was wonderful! The path then sweeps round to the right and leads around The Castle and Castle Ridge before heading back towards the North Face of Ben Nevis.  At "Point 2" we left the path and dropped down into the valley to cross over the small stream, Allt a'Mhuilinn, and then climb up the sloping face of Carn Dearg Meadhonach.  The heat was becoming oppressive by this point and the lack of clouds and addition of flys didn't help matters! (it was at this point that we should have applied suncream to avoid the sunburn and peeling skin that we later suffered from - hindsight is a wonderful thing isn't it!).

When we reached the ridge-top summit of Carn Mor Dearg (CMD) we paused and looked at each other wondering how in the hell we'd get down and on to the ridge-top path that headed around in a semi-circle to the South-East side of Ben.  To our relief another walker suddenly appeared slightly lower down the right hand side of the rocky summit that we were standing on - "so there's the path" I exclaimed, "thank God for that!"
So off we went, scrambling along the ridge top Arete and pausing every few minutes to admire the massive expanse of rock that is Ben Nevis.

I was getting the hang of it by now and we were making reasonably good progress across the Arete until, that is, we hit "Point 3".  Now this section is a dead flat piece of rock, much like a table top, with a vertical drop to the right and a very steep sloping drop to the left - the most exposed part of the walk and somewhat of a baptism of fire as there's nothing for it but to go - one foot after another, until you're across!  At this point you are at roughly 1058 metres above sea level and on anything but a perfect, clear, still day like we had I'd imagine the few steps across would be an entirely different story.
As if this wasn't enough it was at that point that the mountain rescue helicopter decided to buzz past us, at low level, on a few exercise runs - normally this would be an amazing sight (and to be honest it was) but seeing a very large, yellow, Sea King helicopter "popping" up from below you is slightly un-nerving when you're brain is screaming at you to keep your eyes on the floor in front and not fall down the hundreds of metres of rock that are inches away from your right boot!

From there on it was a fairly easy walk to "Point 4" which was the last section of the CMD walk and the scramble (grade 1 ish) up to the summit of Ben Nevis.  This bit was definitely harder than I'd imagined purely due to the physical exertion required to climb up the rocks without any real path to the summit - by the time we got to the summit we'd been walking for 6.5 hours - far longer than either of us had imagined.

The Summit of Ben Nevis
Now the last time I stood on the summit of Ben (the highest point in the UK at 1344 metres above sea level) was April 16th and it was 3ft deep in snow and very, very cold and windy.  The contrast to July 2nd was amazing - clear sky, no wind and around 20C!

The walk down, like the first part of the walk up, was uneventful and fairly tedious.  There were still lots of people so we decided to, where possible, run/jog down as both of us were keen to get back to the car - oh, and we'd both run out of water in our CamelBak's!

8 hours after we started from the car park we arrived back to the car - hot, tired and happy.  Now our primary concern was 1) finding water and then 2) finding a pub on the way back to the B&B in Newtonmore that served Beer and Pie & Chips!

So was it worth it?  YES.  So much so that we've booked a week's mountaineering in the Cairngorms over Xmas 2011 with a view to walking Mont Blanc next year - so watch this space!!
ben nevis climbing cmd arete cotswold outdoor mountain scotland scouts scramble walking