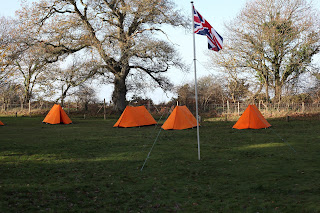 This post is, I admit, slightly off topic, being more about Scouts than my walking or mountaineering experiences but we were camping and we were outdoors so it ticks at least some boxes! More importantly however it was the first time I've really had a chance to use my Montane Extreme Smock (purchased on the advice of Matt some weeks ago - read about it here).

So to set the scene; the 10th Romsey, Crusoe Troop's 2011 Winter Camp was held at Wilverly Campsite (near Wilverly in the New Forest, Hampshire, UK) with 14 scouts and a number of leaders.
Weather wise we were very lucky as the camp was scheduled for the first weekend in December and came at the end of a miserable week of rain and wind but, annoyingly, no really cold weather.

Winter camp is unlike our normal spring and summer camps in that the scouts sleep in 2 man "Force Ten" tents (as in the picture above) and the leaders do the cooking for them - on the basis that the cold weather and likelihood of rain etc don't make for the greatest chances of them cooking on alter fires! 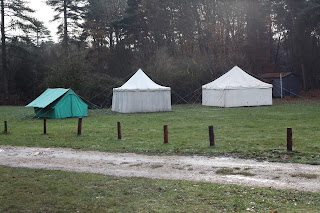 So marquees were put up, the leader's "Gillwell" tent was pitched nearby and the smaller 2-man tents for the older Explorer/Network helpers were also put up (well out of earshot of the leaders tent where synchronized snoring would no doubt echo across the campsite of an evening!). 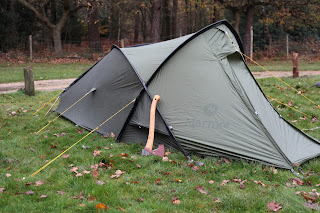 This gave me another great opportunity to use my Marmot Grid tent again - its previous outing during my wild camping trip to Cadair Idris was a good initial test but I was looking forward to spending a few nights in it to give it a bit more of an in depth test and get to grips with pitching it in a more stable fashion.

The Scouts arrived early on Friday (2nd Dec) evening and started, with some minor guidance from the leaders, to put up their Force Ten tents.  From then on the rest of the weekend revolved around a lot of cooking on my part (even bacon eggs and beans becomes a challenge when cooked for 21 people and on gas cookers!) and a lot of running around for the Scouts.  But all in all a great time was had and as I always find when returning from the my Scouting trips I returned home with a great sense of achievement and satisfaction that the boys had not only enjoyed themselves but had learnt from the weekend - that is after all the reason we do it!

So on to the Extreme Smock...  I have to admit that after the initial purchase I was unsure about its usefulness to me and was going to take it back at one point - I'm so glad I didn't!
The smock is designed to be worn next to skin, as a single, do everything, layer that keeps you warm and insulated regardless of the garment being wet or dry, but I have taken to wearing it with a thin base layer underneath - purely for versatility and it seems to work well like this for me.
I pretty much lived in the smock and both the front, pouch style, pocket and long side zips were invaluable as was the full hood that did a fantastic job of keeping my warm and dry during our rounds of the tents after "lights out".
So impressed am I after this weekend's use of the Smock I've added this to my kit list for the winter trip to the Cairngorms over Christmas this year - now I just need to find space for it in the car!!
10th romsey camp camping extreme smock hampshire marmot marmot grid montane new forest scouts winter camping