January 24, 2012
Why on earth are we doing this?  At 11am while walking across the open, wet, muddy, rain swept Dartmoor plains we both were asking ourselves this very question - albeit silently as neither of us wanted to look up from the course ahead and the possible shelter that the nearby woods offered.....

A bit of background information;
So we were here for an evening and meal at River Cottage HQ (Donna's Xmas Present), an event much anticipated by both of us, but we'd both decided that we'd drive down after work on Friday giving us the day before the meal to go for a walk - and Dartmoor seemed like the nearest place offering decent walking - so out came the OS maps and a circular route from Postbridge to Dartmeet was settled on and uploaded on to the trusty Garmin Edge 605.


Saturday 21st January 2012 - 8:30am
After driving down to our B&B (Hedgehog corner near Axeminster) and awaking to the pattering of rain and a decent breakfast we headed off on the 90 minute drive to Postbridge which was to be the start of our 9 mile walk across Dartmoor.

The car park at Postbridge was surprisingly busy considering the weather (wet and windy which was to be a continuing theme for the duration of our walk) and most of the other people there were similarly dressed head to two in one form of waterproof clothing or another. 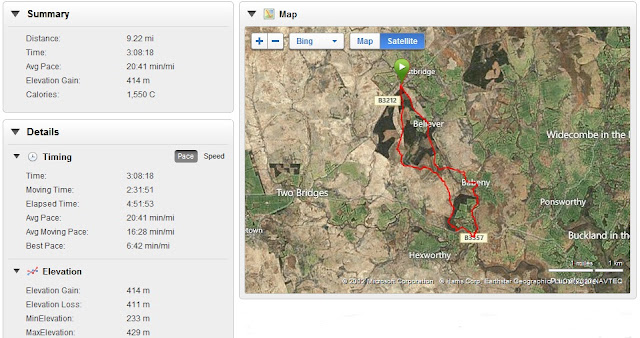 10am - we headed off across the road and into the nearby forest that slots between the B3212 and the smaller road to Bellever and followed the main path up through the wooded slopes towards the first high point of Bellever Tor (443m).

Our path then took us back onto the main track for a while before heading off-piste and up onto the gradual, heather covered, slopes of Laughter Tor (420m) passing numerous stone circles and arrangements on the way.  I made a mental note to do a bit of research into these interesting stone formations but as yet (at the time of writing this some week or so later) I haven't made a start on it yet! 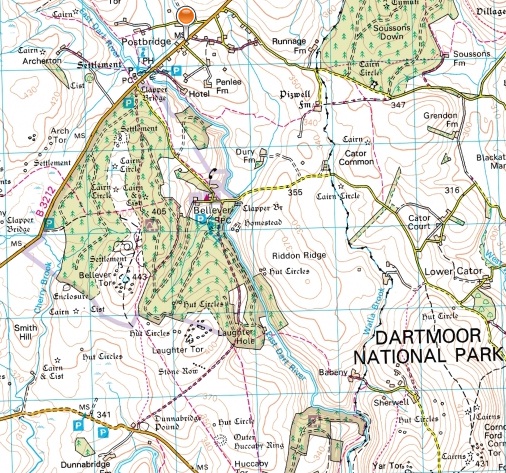 From here we tracked back onto the main path and followed the fence line of the woods down, past Laughter Hole farm and house and back onto open moorland again before joining another, very faint, path near to Outer Huccaby Ring that took us down to the Snider Park Plantation and B3357 leading to Dartmeet.

We followed the road down into Dartmeet and then turned off left into the car park and small visitors centre/cafe before heading back up onto heath land again by Badgers Holt and then following the path along the banks of the East Dart River for a few kilometers and it was here that we ran smack bang into Donna's nemesis.... 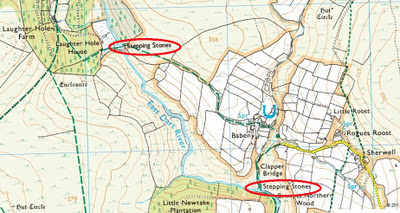 In front of us lay two crossings of the East River Dart (although we later found out, much to my amusement and Donna's chagrin, that the first crossing was unnecessary!) by means of Stepping Stones which during a previous river crossing in the Lake District had put pay to a day's walking and wild camping as Donna had plunged into the frigid waters while attempting to cross with a fully laden pack!

Donna managed to negotiate both crossings with ease despite the flooding conditions of the river and we proceeded to follow the path past Laughter Hole House and back into the forest which would lead us back to Bellever.

By now the rain had subsided somewhat so we stopped for a brief lunch which gave me time to inspect the new Paramo Aspira smock and assess its performance so far.

Overall the Aspira smock has impressed me, both because of its comfort factor and ability to keep me warm, dry and perhaps more importantly sweat free while walking.  It's worth pointing out that some water did make its way through to my base layer but there was a lot of rain which was being wind blown onto my right hand side (where the water had managed to seep in) and I "may" have left one of the side vent sips open a little too long as the rain came down in earnest!

Upon reaching the road at Bellever we followed this for a few hundred meters before joining the bridleway again and heading the final 2k or so back to the car park.  Only now did the weather clear, giving us a decent view of the surrounding moor land and tor's scattered around us.

Overall we walked 9.22 miles across some fairly challenging terrain but this was more due to the weather and local conditions than anything else.  It was nice to walk somewhere different and see a different terrain, it hasn't dampened my appetite for the hills and mountains but it's good to explore different areas as much as possible so that you keep wanting to get out and walk more.

As a final footnote the meal at River Cottage HQ that evening was amazing.  There is no better word for it - quite simply the best meal (and experience) that I've ever had, I only wish it was closer so we could go more often!