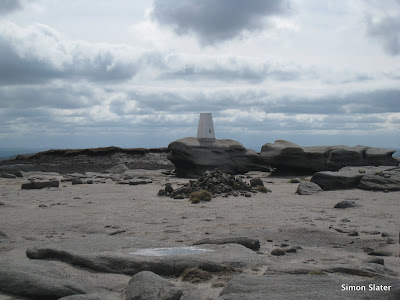 So after a very early start we arrived in the small hamlet of Upper Booth, just west of Edale, which was to be our starting point for the walk.
Donna had planned out a 10mile loop from, and returning to, Upper Booth with a short "there and back" leg that took us to Kinder Downfall - a place that both of us were keen to see.

Although the drive up, all 3.5 hours of it, as well as the week leading up to the walk had been pretty much solid rain we were pleasantly surprised to find that, although fairly breezy, it was dry and the sky didn't look to be full of rain clouds so waterproof trousers stayed in the bags - for the time being anyway! 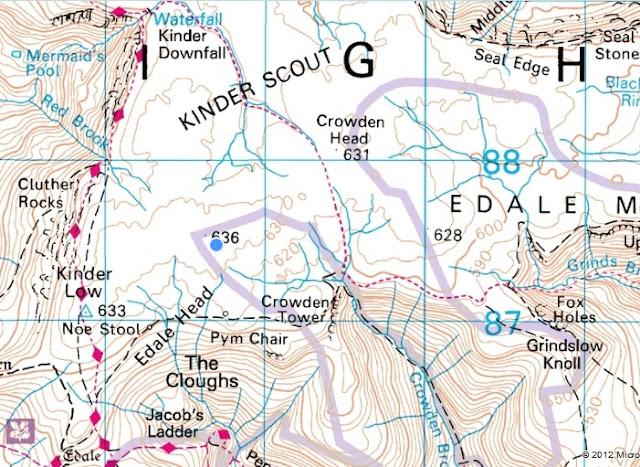 From the car park we headed up the small road that leads to Upper Booth campsite and from there on to the Pennine Way and Jacobs Ladder.  Having never experienced the Peaks' before I spent the first part of the walk (to the ladder) enjoying the scenery, so much so that on the return leg I couldn't remember the last mile or so at all! 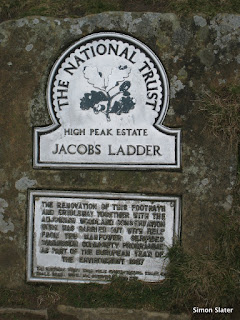 Jacobs Ladder isn't really as daunting as it sounds and the well maintained path makes fairly easy going for fairly fit walkers - the alternative being a zig-zag path to the same point at the top of the "ladder".

From here we continued to follow the well kept path of the Pennine way past Edale Rocks and then on to the trig point (633m) just below Kinder Low before heading across the rocky plateau to Kinder Downfall. 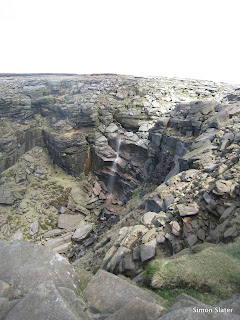 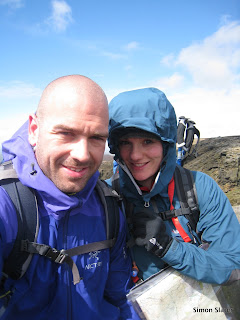 To be honest both Donna and I were slightly disappointed by Kinder Downfall.  It probably wasn't looking its best despite the recent rain, but the nearby rocks did provide brief respite from the wind that was sweeping across the plateau and stinging our faces at every available opportunity.

From here the plan was to back-track to Edale rocks, have a quick lunch and some welcome hot coffee, and then head westwards on the marked path (that turned out again to be very well maintained) to Grindslow Knoll (601m).

The rock features around Noe Stool, Pym Chair and the Woolpacks are amazing and the next few images are some from the pictures taken that day (the rest can be seen on my Picasa Web Album here). 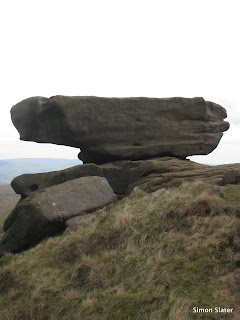 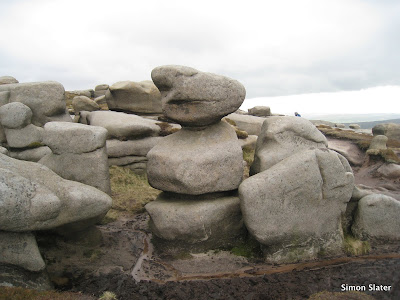 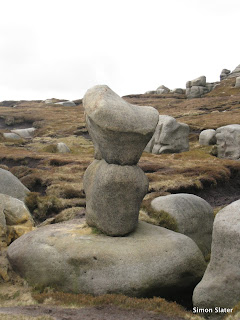 Luckily the path across the plateau is very well kept and the large blocks of stone paving give easy footing across the boggy, muddy ground so we made good time, stopping only to admire the interesting rock formations.
After crossing over the falls, and deciding not to follow the route downwards only to have to return back up again, we forked off to our right and followed a smaller track across the boggy ground to Grindslow Knoll (601m).  It was here that we had our only rain shower of the day; not even long enough for waterproof trousers, it started as hail and then turned to drizzle for 10 minutes or so before the strong wind blew it over the top of us and the sun just about managed to shine again.

From the knoll we started to descend the grassy banks (disturbing a number of red grouse) towards 3 small tarns before following a steeper, zig-zag, path down towards Broadlee-Bank Tor and the main Pennine Way path again and from here it was a fairly easy walk back past the campsite and along the road to the car.

10miles in 3hrs50m - not bad going and luckily the weather was kind of on our side today, which makes a pleasant change.

We both enjoyed the walk on Kinder Scout and there were a number of aspects to the walk that I wasn't expecting at all. The plateau summit area is similar to the Black Mountains and the rocky outcrops similar to a number of places in North Wales and the Lake District, but what is strange is being on top of Kinder and being able to look across to Manchester in the near distance - the feeling of being "alone" and in the wild kind of disappears when you see a mass of buildings and industry on the horizon.  Maybe Kinder is one of those walks where being closed in by the weather isn't such a bad thing after all?!

I've added the full detail of the day's walk to my Garmin Connect page (uploaded from my Garmin Edge 605) which can be viewed in the window below;