It's been a while - back in Wales 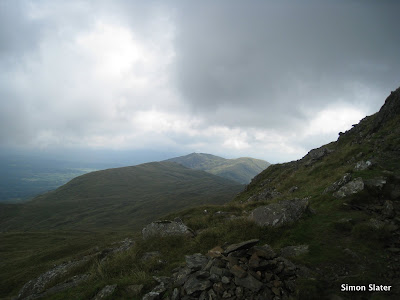 It feels like it's been ages since I was able to get out into the hills and do some proper walking - and even longer since I had the time to write anything about it on my blog. So here goes!

We'd been planning a trip to Snowdonia over the August bank holiday weekend for some time and had settled on the area of hills to the W/SW of Beddgelert for a number of reasons but most importantly as it would be slightly quieter than the main Llanberis/Snowdon area over the weekend.

Heading up early on Saturday morning allowed us to miss the bulk of the bank holiday traffic and we arrived at the Llyn Gwynant campsite just after 10am.  Unfortunately the campsite was far from quiet - which was to be expected I suppose being so close to Snowdon and within walking distance of the start of the Watkin Path up Snowdon.
Now at this point I should mention that the campsite was actually really nice, clean and well looked after, and on a quieter weekend it would probably be a really lovely place to stay as you can camp pretty much right next to the lake - it was just the combination of a very busy weekend and a number of other campers that, for some reason, decided to pitch their tents pretty much on top of ours!  Anyway, back to the walk..


We'd planned to pitch the tent on Saturday, then head over to the small town of Beddgelert to start our circular walk to Moel Hebog and then back to the campsite before the second, 13 mile walk, to Foel Grach (976m).  Things, unfortunately didn't go quite according to plan!

The route (initially from the September 2012 edition of Trail Magazine) starts from the small town of Beddgelert, around 17 miles from Betws-y-Coed, and free parking is available near the large Gelert camping store on the A498 heading away from the town.

Rather than heading back into the town and following the path shown on the map above we headed up the A498 a short way before taking the path to the left which heads up, through the forest, towards the farm at Meillionen which the path passes through and then heads due West - we'd planned to reach the farm and then head Northwards through the forest to join the path heading west to Hafod Ruffydd Uchaf but navigation, and the route of the path, around the farm is very difficult due to re-routing of the path and the farm buildings and total lack of official route markings.

Now the path we were following (both on the map and via the GPS) is a permissive route and I know this doesn't necessarily mean that it corresponds to a path on the ground but this time we were lucky that the owner of the house/farm at Meillionen wasn't too annoyed at us being on his land (route or no route) and pointed us towards the main path through the forest.
Once back into the forest we headed northwards towards Llyn Llywelyn on the well marked path that forms one of the many cycle routes that criss-cross the forest but after walking a mile or so, in the mist and rain, we decided to forego the summits of Moel Lefn and Moel yr Ogof and head back down through the forest towards the small stream (Cwm Meillionen) and the point where the permissive path fords the stream.

The path that follows the Cwm was fairly hard going after the rain and had made the rocks as slippery as ice but thankfully it didn't take too long to reach the end of the forest path and the Eastern flank of Moel yr Ogof where it meets a boundary wall at Bwlch Meillionen and from here heads up towards the fairly steep slope to the summit of Moel Hebog (782m) which, as you can see from the picture below was fairly claggy and windy and not the most hospitable place to hang around for long!
"The Scramble" and the descent of Moel Hebog
On the ascent we passed another couple who mentioned the high wind on the summit and that they had walked the other way to us - "up the scramble" which started my mind racing...  Had I missed something on the map that should have alerted us to the scramble? Were we going to walk to the summit to find a difficult scramble that would be made all the more awkward due to the high wind and rain?
But we didn't have a huge amount of options open to us (aside from going back, which wasn't an option for either of us) so decided to have a bite to eat in the lee of a crumbling boundary wall and then head on up to the summit to see this scramble for ourselves.

Aside from the fog and wind (which was fairly strong by this point) the scramble didn't really pose too much of an obstacle - use of hands was required a couple of times but it was more a case of careful walking and picking a line down through the rocks.
I have to be honest, I'm glad we did the walk this way round and didn't have to walk up the "scramble" as it is fairly relentless on the way down and would be really hard going on the way up.

The path back down along the ridge is quite easy to follow, even in fairly poor weather, and is well marked with cairns leading to the farm before joining the main path that leads down to Cwm Cloch Isaf and the end of the walk.

My Picasa photo album from the walk can be viewed here;

The next morning, sat in our tent by the lake listening to the rain rattling on the canvas we decided to forego the 2nd night of camping and (as Donna wasn't feeling too great) head back home - conveniently for Donna and I (but not our bank balances) we had to pass through Betws-y-Coed on the drive back which is home to numerous outdoor shops so, of course, we had to stop and "have a quick look" which resulted in a few purchases that will be put to good use (and tested thoroughly) in Canada in a few weeks time.

Initial thoughts and more detail on these products can be found in my next post....