For the second weekend in a row we'd woken far too early to the sound of the alarm and, after a quick breakfast and loading the car with kit bags, we were heading up the A34 on our way to the Welsh mountains.
Both to shorten the trip there and back as well as to see something different we had decided to walk a ridge route to the summit of Black Mountain (Fan Brycheiniog) in the west of the Brecon Beacons National Park.  We've walked a lot in the Beacons but have never ventured this far West and were both looking forward to a new challenge.

So, we've established where we walked so it's probably time to get on to the walk and route itself;

The walk...
We started from the small village of Llanddeusant and the convenient (but fairly difficult to get to along single track roads and steep tracks that would be problematic in the winter) parking area at Blaenau (see below) which is at the head of the main track to the lake of Lyn y Fan Fach. 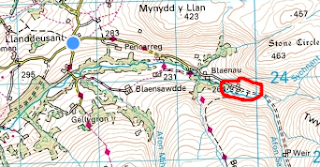 The well graded double track rises smoothly on your way to the Lyn, past a trout hatchery and series of weirs, before arriving at the dam across the top of the picturesque Lyn that sits at the western end of the range (some interesting information on the naming of Lyn y Fan Fach can be view on Wikipedia here).
From the Lyn we followed the westerly path that tracks the lake before climbing up the side of the escarpment to join the Beacons Way path that runs along the whole ridge.

We followed the Beacons Way along the edge of the escarpment to Waun Lefrith (677m), then on to Bannau Sir Gaer (749m) and then, with the wind picking up, around to the trig point and summit of Fan Brycheiniog and the highest point of the ridge at 802m. 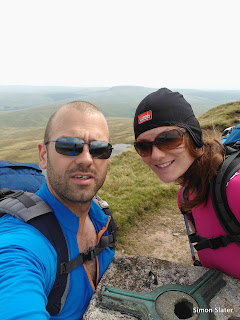 By now the wind, although warm, was fairly brisk so we took the opportunity to stop for lunch and a welcome cup of coffee in the circular stone shelter just next to the trig point. 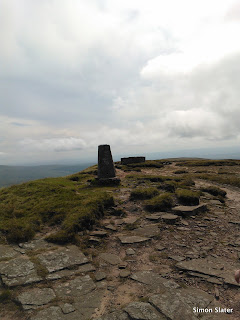 As most people who hike/walk/climb in the mountains will tell you as soon as you stop, regardless of how warm you have been, you start to cool down very quickly and it's in times like these that a synthetic (or down) insulation and/or windproof layer comes into its own.
I've been using my Montane Prism jacket for a while now and rarely go out into the hills without it as it packs down into a 1.5L stuff sack that stays in the bottom of my rucksack until its needed - a major benefit of a synthetic jacket over down is that it can be used when wet and put over the top of waterproof layers and will still function properly and keep you warm.

As you may have seen in the last post (here) Donna has recently purchased a synthetic jacket in the form of a Patagonia Nano Puff and this was the first real test "in the field" for her and it performed admirably.  Packing down into a 1L stuff sack it is lightweight and easy to carry on pretty much any walk and does (according to Donna) a great job of keeping out the wind and warming you up quickly when its put on.

We descended from the summit via a steep rocky path down towards Lyn y Fan Fawr and then turned off this to head on a north westerly direction along the edge of the lake.

Once you reach the end of the lake navigation becomes a bit more tricky, especially if the weather is less than perfect - luckily for us the visibility was good but even so some care is needed to plan the route back towards the car.
After a look at the map (OS OL12) we'd decided to follow the 600m contour for around 1500m, clipping the head of two small stream heads of Nant y Cadno and then passing a stone circle before reaching the more pronounced gully and stream (Nant Melyn) that runs down towards the double track at the start of the walk, and the car.

This was by far the easiest, and shortest, route back to the start point - an alternative route can be taken by joining the path that runs down from the summit of Fan Foel (781m, just before the summit of Fan Brycheiniog on the Beacons Way path) before heading either NW (looping around to the start of the walk and car park) or NE (to the forest of Mynydd Wysg) - the only slight difficultly here is picking the track out from the numerous sheep tracks that criss-cross the grassy plateau, not easy in claggy weather!

The GPX route log of the walk (recorded on my GPS MAP 62s) can be viewed at GPSies.com - here