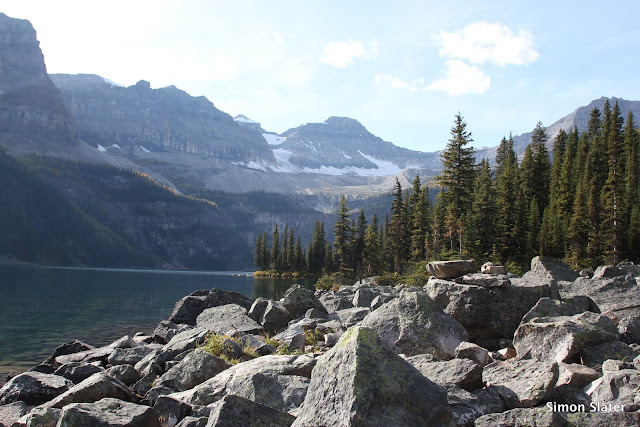 Our first full day in Canada saw us heading from Canmore to the picturesque Lake Minnewanka before heading on to our first camp-site, "Castle Mountain". 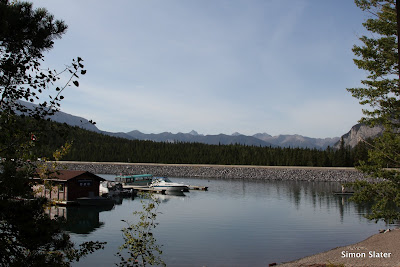 With 43 pitches for both tents and RV's the site was "self registration" but benefited from flushing toilets and (like all of the camp-sites we stayed at in Canada) was quiet, spacious and well maintained.

We set up camp and got to grips with the kit that we'd hired for the 2 week trip - everything we needed was there including all of the cooking, cleaning and eating kit - even some extras that had been left by people who'd hired before us like tea bags which, for an englishman, are always welcome!  Anthony also added a proper hammer and 8" solid pegs which we would have really struggled without as most Canadian pitches are gravel / hard standing to cope with RV's as well as tents. 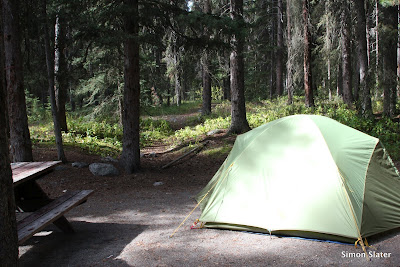 Two things of note about the hire kit;

We also managed to pick up the biggest bag of Pretzels that I've ever seen - for $4!!  It lasted us for nearly the whole two weeks but I have to admit that by the end of the bag I wasn't too eager to rush out and buy more. 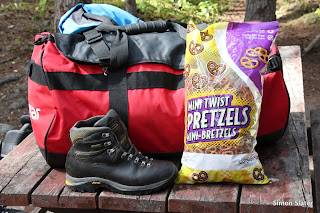 In the afternoon we headed out to Boom Lake, located off Highway 93 and around 7.5k west of Castle Junction.

The walk to the lake is considered easy with only a 215m elevation gain and is 5.5km each way from the car park.  The trails are well maintained and easy to follow and clear signposts are dotted along the path to show optional routes and distances to destinations - a huge improvement in some trails in the UK.

The Boom Lake car park and trail head notice board was our first real introduction to bears, and more importantly, bear warnings.  You realise fairly quickly that you're in bear country now (and Elk as September is the mating season and more people die each year in Canada from run in's with Elk than they do bears) and certain precautions are necessary that, to start with, seem a bit daft.
Carrying bear spray, walking in groups and making noise (or carrying bear bells) is recommended and, on some trails, mandatory with fines from park rangers if the rules are not followed.
There were a few areas in both Banff and Jasper National Parks that were closed completely to walkers due to a particularly good berry season which the bears love!

On arrival at Boom lake we stopped for a while at the lake side to take in the views and to get our first real taste of the Rockies and take in the sheer size of the place.  We were lucky to be the only people at the lake (leaving later in the day has it's plus points) and as the weather had been hot (27C plus) the air was still warm as the sun had yet to drop below the tops of the mountain.


The walk back was fairly uneventful and, thankfully, no bears were seen or heard although the excess of ground and red squirrels more than made up for that.

Back at the camp-site plans were being made around the camp fire for the longer, and much harder, walk the next day to the Sulphur Mountain....
banff national park boom lake camping canada castle mountain campsite hiking lake minnewanka mountains north face rock 32 thermarest dreamtime walking
Location: Banff, AB, Canada