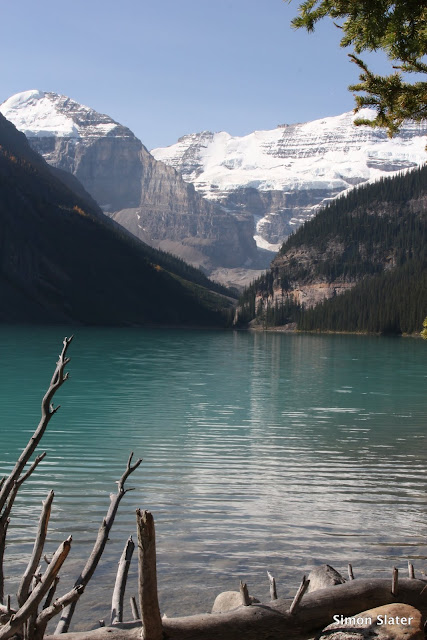 There was a subtle difference to the morning of Thursday 20th September 2012; we'd woken up in a tent, again, still in Canada (Lake Louise Camp-site in the Alberta Rockies to be precise) and it was cold, about zero again, but promised to be clear and hot (around 28C) - the difference today was that I woke up with an incredibly painful back.  I have no idea how I managed to do whatever I did to my back but needless to say that thoughts of total inactivity and reading book after book on my kindle were running through my mind!

After a painful breakfast and probably too many Ibuprofen we decided to head back to Lake Louise and to walk the "moderate" 5.5km (each way) walk up to the Plain of Six Glaciers Tea House with a possible extension to get a closer view of the Victoria Glacier.


So with the early morning mists rising off Lake Louise we started to make our way along the trail that leads alongside the lake before heading up into the sub-alpine on the well maintained trail that leads you up towards the Tea House and moraine left by the Victoria and Lefroy glaciers.  Elevation gain is only 365m from the lake to the Tea House but parts of the route are deceptively steep and in wet or winter conditions could make the walk slightly more challenging! 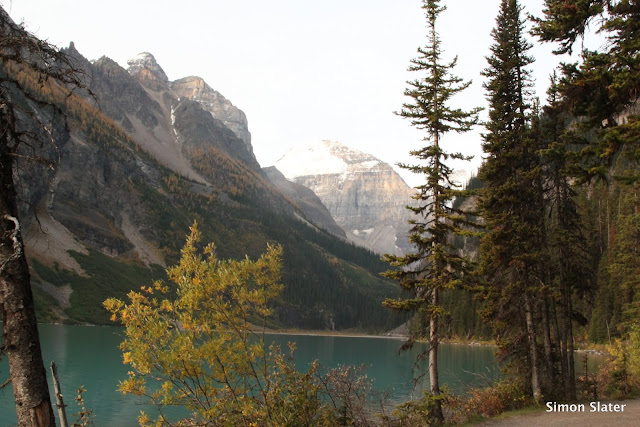 As you start to clear the trees you walk out onto a more exposed landscape with the ground, terminal and lateral moraine that have been left behind by the Lefroy and Voctoria glaciers as they retreated 100's of years before.  The Lefroy glacier is pretty much non-existent now but the Victoria glacier, although receding, is still very much there and presents an impressive sight once you enter into the valley itself.

Before reaching the tea house you have to make your way across a fairly narrow ledge and a steel rope has been bolted to the rock face and runs along the length of the ledge to aid walkers - not really necessary in the summer but in claggy or snowy weather this would be essential to ensure the safety of walkers.


It's when you reach the Tea House that the trail, and the views, really start to get interesting and you start to follow the lateral moraine ridges as they snake towards the foot of the mountains and the Victoria glacier at the head of the valley.

Looking down to the left as you walk further up the trail you can see the debris covered glacier that, at first glance, looks like a rough gravel path but on closer inspection the ice of the glacier can be seen through the cracks. 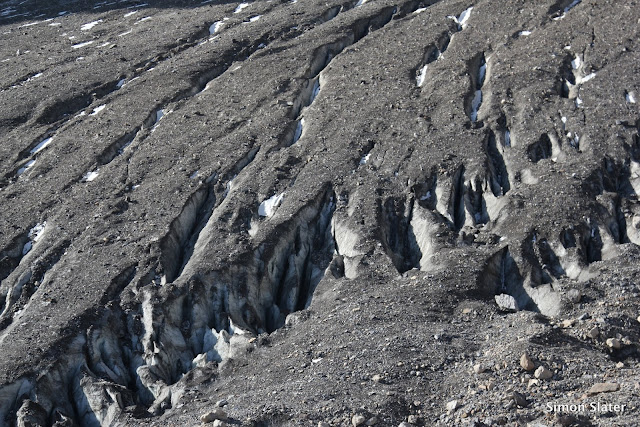 The trail from the tea house takes you about 1300m further along the valley and finishes with a fairly steep and narrow moraine ledge and a magnificent view of the Victoria glacier and Abbot's pass.  The pass was named for Philip Stanley Abbot who, in 1896, was killed trying to ascend Mt Lefroy - the pass is know as Deathtrap due to the frequency of rock fall, avalanche and crevasses.


It was standing here, in the eerie silence created by the surrounding mountains, that I saw (and heard) one of the most amazing sights from my whole Canadian trip - tonnes of snow and ice falling from the glacier to crash down on to the rocks a few hundred feet below.  About 20 seconds after watching this in silence the roar and thunder reaches your ears and can still be heard after the snow has settled on the rocks below.
It's amazing, and slightly worrying, to think that the ice and snow that has been attached to that glacier for thousands of years is slowly crumbling away into the valley below and you can really get a feel for the true force of nature.


The walk back to the tea house is fairly straightforward, its the same way that you come up, but the initial descent from the moraine ledge is actually quite tricky due to the lose rock and debris that you have to walk over coming off the ridge.

Stopping at the tea house itself is a definite must and sitting on the decked veranda drinking hot chocolate and eating apple pie was bliss.
The tea house itself was built, in 1924, by Swiss guides and stands at 2100m above sea level.  There is no electric or mains services here and everything is cooked on gas stoves with the main stores for the whole season being dropped in by helicopter at the start of the year. Staff (who live there during the week) have to hike in, or bring in on horseback, any other dry or fresh goods that are needed.
We were lucky to have such stunning weather; clear, bring and hot, and being towards the end of the season and with an early start we didn't really see too many other people but it does get very busy up there so my advice would be to leave early and get there before the crowds!