December 14, 2012
Day 2 of our December 2012, Scottish winter skills trip saw us waking up in Glencoe youth hostel (run by Scottish Youth Hostel Association - SYHA) at 5am as we'd planned to be up and about early so that we could make it to the first peak on the Ring of Steall which was our planned walk for the day.

However, the sound of the alarm at 5am was nearly as loud as the sound of the rain hitting the window of the youth hostel window so we all decided (thankfully) that we'd get another hour or so's shuteye and then review at 6:30am.....

.....6:30 arrived and, sat downstairs eating JD's porridge and hot chocolate combination, we decided to move our route from the wet, windy, Ring of Steall that we'd planned to do, over to the slightly more sheltered route up to Stob Coire Raineach, at the Northwest end of the Buachaille Etive Beag ridge and only a few miles from the YHA at Glencoe.

I've added the route log from my Garmin at the bottom of the post and you cal click through to the full route details on Social Hiking to view more info.. 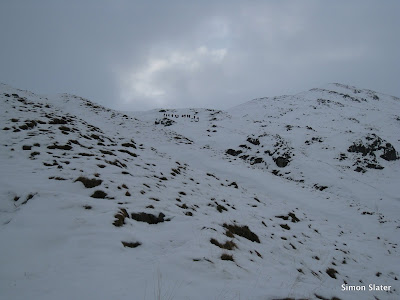 The ridge (Buchaille Etive Beag) is the smaller brother to the more well know, and well trodden, Buachaille Etive Mor but is still fairly impressive being over 3km in length and with 2 mountains of "Munro" status; Stob Dubh (958m) and Stob Coire Raineach (925m).

By the time we'd arrived the weather had brightened up a little and there were already a few cars in the carpark and people kitting up ready for the day's walking.

We let the larger group (10 or so people) go ahead of us and then started along the well maintained, albeit slightly wet and boggy, path that roughly follows the river before coming to a left hand (SW) fork that starts to climb more steeply towards the ridge.

The other group were ahead of us continuing to follow the main path but we decided that it would be better practice and more fun to take a slightly more direct route up the North West face of Stob Coire Raineach.

The snow was still not really compact enough for crampons - with winter boots being more than enough to cope with the conditions underfoot and give enough stability to remain safe - but ice axes were required and we stopped briefly to get the axes out and stow poles for the ascent.

The route up onto the summit plateau of Stob Coire Raineach was steady and fairly easy going but we did have to build in a few slight deviations and route changes to account for avalanche prone slopes that looked a little too steep to be worth taking the risk on.

Once on the summit we built a quick snow wall as a shelter against the wind that by now had really picked up and was blowing at a steady 30-35mph with the occasional gust being strong enough to make standing up-right difficult.  Insulation layers (in the form of my wonderful Montane Prism jacket) were put on for our brief stop to take the bite out of the wind.

On leaving the summit and dropping down to the saddle between the two munro's we umm'd and ahh'd about continuing straight on and up on to Stob Dubh but, with the wind really pickup up, and the clag dropping down a few hundred metres we decided to play it safe and opt for a more leisurely walk back to the car.... 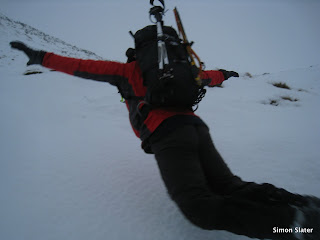 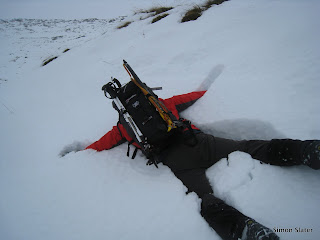 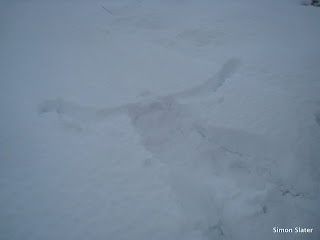 As you can see the walk back down to the car was anything but serious - the snow angel competition provided a brief distraction, as did towing a surprised JD around the icy car park while he was clinging on to the car door!

The day was a great re-enforcement of the skills that we'd practiced on the slopes of Ben Nevis the day before and both the initial re-location from our previously planned Ring of Steall route and the decision not to attempt the Stob Dubh peak was signs, if nothing else, of our ability to work as a team and to think rationally and sensibly about situations in the mountains that affected us all.

Sometimes the hardest part of walking in the hills with other people is having to make decisions that you wouldn't normally make on your own, generally for the safety of the group as a whole.  If, as we found, the whole group is of similar abilities and similar mindsets then the stress that can be caused in these situations is removed allowing you to focus on other things - like the view!