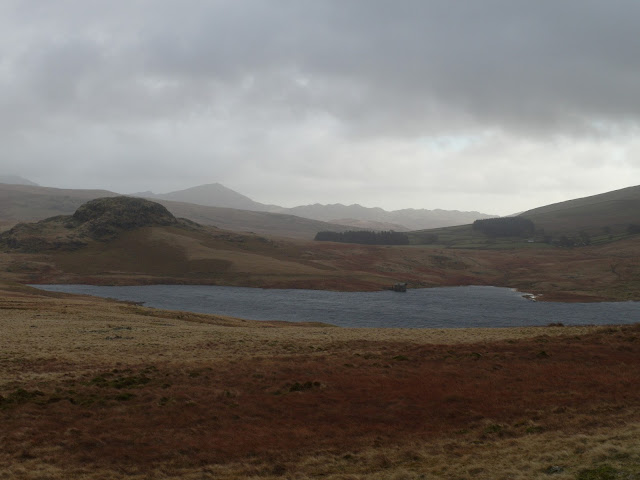 Over the next few posts I'll be writing about the two weeks spent over Christmas 2012 in the Lake District, based from a small cottage at Woodend near Devoke Water.

The plan was fairly simple; 1) book a cottage in the Lake District for the two weeks over the Christmas (2012) & New Year period 2) get in as many walks/climbs (hopefully in the snow) as possible, 3) try and forget about work! - unfortunately the weather was less than perfect and clear, crisp days walking in the snow were a long way from reality....

We arrived at "The Bothy" after a long, wet but uneventful drive up from Romsey and as it was dark and raining (a theme for the 2 weeks!) there wasn't much more that we could do aside from unload the car and run through some of the routes that we'd planned for the coming days.

When we looked out of the window on the first morning (23rd December) and saw the wind tearing through the few small trees around the cottage we decided to take a short exploratory walk down to Devoke water and possibly up to the nearby Water Crag.  We'd planned a longer walk around the same area for later in the week and this would be a good opportunity to have a gentle walk without worrying about packs and having to drive anywhere! 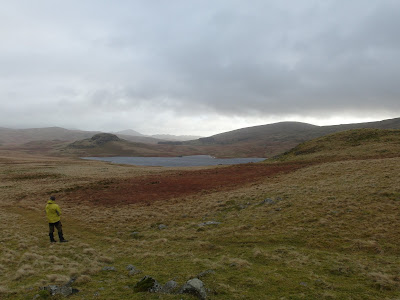 I didn't take the Garmin or ViewRanger/GS3 with me as we weren't planning on a long walk, we just picked up the map and compass and headed off out onto the small track running past the bothy and then straight up into the fells.

The path takes two routes, through the farm and down to Devoke water or up around the side of the field system and then onto the fells allowing you to pick your own path and we opted for the latter, heading up into the craggy rocks to get away from the saturated ground around the edges of the field systems and stream paths.

Once up onto the fells we could see Devoke water stretching out in front of us and Water Crag (305m) to the NorthWest of the lake.
We headed down towards the water, aiming for the Northwest point with a view to walking clockwise around the lake, up onto Water Crag and then down and continuing the walk back around the lake, over "The Seat" (245m) and then back along the path to the cottage.

Descending from the higher ground (around 300m) the wind was fairly fierce and at times it was a struggle to stand upright but once down the wind abated slightly which made walking slightly easier! 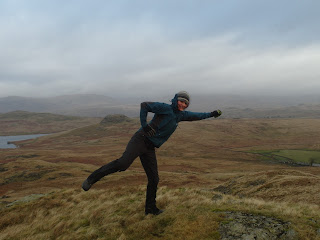 Just before we reached the edge of Devoke water we came to the remains of someone's wild camp (near Rowantree How and the 2 small streams).  Now I may be overreacting here but if you're going to wild camp there should be no "remains" and there should be no visible evidence that you've camped there - surely thats the whole point isn't it?

Well unfortunately who ever decided to camp here clearly doesn't understand the meaning of wild camping and left the site in a bit of a mess.  Normally I'd pick up litter like this but on this occasion I wasn't able to - as the lady/girl that had camped there had decided to leave rubbish that no one wants to see, let alone pick up.
I know it's "easy" for a guy to say this but if you're camping and need sanitary products surely you can bag them and take them home?  FFS don't throw them on the floor, NEAR A BLOODY RIVER!

It really pissed me off that people think its acceptable to leave rubbish in the countryside - if you take it in with you, take it back out again - but when it's people who have hiked across country and wild camped it grates on me even more, a funny way to show your appreciation for the countryside. 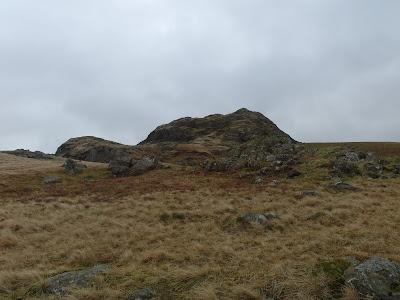 Anyway, rant over!  Walking around Devoke water was fairly easy going despite the boggy ground, saturated from weeks of rain, and we made our way up onto Water Crag following a faint path.
Once on the summit we decided not to walk up onto the summit of Rough Crag but to walk back down towards the water and continue heading around to the gravel track and then head up the slight scramble on to The Seat.
It's worth pointing out that there is an easy path/walk up onto the Seat but we opted to take a slightly more challenging route with a minor scramble to the summit.

From here it was only a short stroll back down to path that leads through the farm (a slightly diverted route is marked for winter when the cows are in the yard) and back to the cottage.

Back in the cottage it was planning time; a bottle of wine, OS maps and the GPS - and then packing bags ready for the next day's trip to Caw....
cloud crags devoke water fells hiking lake district rowantree how the seat water crag wild camp winter woodend cottage
Location: Ulpha, Cumbria, UK