"Valley of the 5 lakes" - MTB trail riding in Jasper

During our first day in Jasper I spotted a bike shop with rows and rows of shiny mountain bikes outside and a sign reading "for hire" that seemed to be drawing me in!  We'd talked about doing a bit of mountain biking if we got the chance and my MTB riding buddy back home, G, had wowed me with tales of mtb'ing in the Rockies so this "chance" seemed to good to miss.

I was left slightly disappointed in first store we tried as they only had hard-tail bikes for hire and, to my mind, there is no point riding some of the best trails on the planet with a rigid rear end - only full-sus would do, so off we went in search of another shop..
We walked into Vicious Cycles later that day and after so long away from bikes and the smell of GT85 it was a battle of wills to walk to the counter without thinking of buying anything.
After a good chat with the guy we'd hired 2 Santa Cruz Blur's - full-sus, decent brakes and ready to roll the next day.  He also gave us some trail advice as there are loads of amazing trails to be ridden in and around Jasper; there were a couple of easy loops that he marked out but all the sensible options (bearing in mind Donna had only been on 2 MTB rides in the New Forest up until now!) disappeared as soon as he told us about the "Valley of the Five Lakes" trail....

Referred to by him and the Lonely Planet book as "one of the best trails in N America" there really was no decision to be made was there, we had to ride it - I just needed to convince Donna.

The next morning (23rd Sept 2012) we headed down to Jasper to pick up the bikes.

Bike, helmet, lock, some air in the tyres and we were away.... well almost, why do Americans and Canadians insist on putting their brakes on the wrong way round? After a few impromptu "stoppies" and curses at odd brakes we were away!

A few hundred metres out of Jasper town centre we joined the red squirrel run (see Jasper trail map here) which is a great warm up, allowing Donna to get a feel for the bike, and takes you to Old Fort Point which is the start for the Valley of the Five Lakes trail as well as a number of others;

The trail is a 17.6km long loop, is graded as difficult with 250m height gain and is described as below;

combines rolling, undulating terrain with several rocky,
rooty sections. Popular with hikers for its dazzling views,
bikers should be alert for congestion and steep hillsides near
the opal lakes. To avoid the crowds, skip trail 9a, ride in the
early evening or use the shoulder seasons. Slow down and

dismount for other users. Loop back on 9b.


There isn't much warm up time on the trail, you're straight into the action, and as such we didn't really have a whole lot of time for pictures or stopping to admire the scenery but I will say this about the trail - it's bloody good and I was in my element; jumping rocks and raised roots and flying down lose, rocky, single track downhill trails and berms through the trees with the idiotic grin on my face that most mountain bikers will know well!  Donna however was taking things a little more cautiously and there was a slight tinge of panic and alarm on her face a some points.

For those of you reading this who have no desire to travel all the way to Jasper to ride this trail don't worry.  Yes it's awesome and I'm glad to have ridden it but the trail centres in Wales (such as Afan or Coed-y-Brenin) as easily as good and the actual trails are better as they are MTB only - in Jasper you have to be aware of people and other cyclists (and bears) going both ways on the trail so you can never really go full tilt.  My only criticism of the trail is that you can't ride all of it - there are times when you have to push your bike.  Yes you can ride down the sections but as its a loop and some sections are ridden both ways these rideable downs are impassable up's - Donna really struggled on these bits and, to be honest, so did I. 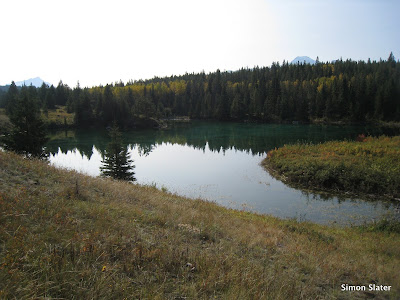 At the end of trail 9b (basically after the 5th lake) we decided to head back out to HW93 and then follow this back to Jasper, linking on the Wapiti trail for the last 5k back to Jasper town where we popped into good old subway for lunch before heading back out and on to the flat trail of Route 7 which follows the Athabasca river before arriving at the jaw dropping Annette and Edith lakes where we stopped for lunch.

Heading back to Jasper after lunch we passed a fairly large herd of Elk relaxing on the other side of the river, even though we'd seen a fair few Elk now I still hadn't tired of seeing them, and taking pictures of them!

By the time we arrived back to Jasper and dropped off the bikes it was around 3:30pm and it's fair to say that we were both knackered, but happy!

We arrived back to the campsite to be greeted with another herd of Elk and one large male that was asserting his authority in the middle of the camp ground and kid play area - they're impressive animals but when they're only 10ft from your small flimsy tent they do make you slightly nervous!


A great ending to an amazing day - mountain biking in the Rockies is something that I'm not going to forget in a hurry and I'm so glad that we took a short break from hiking/climbing in the mountains and headed out on two wheels to experience them and see them in a different light.