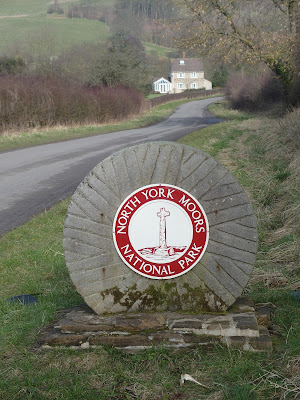 I've been somewhat remis so far this year both in terms of updating my blog and getting out into the hills and walking - both of which I committed to do with more conviction and vigor this year and that, for a whole host of reasons, hasn't been the case.

So we decided that while up in Thirsk, North Yorkshire we'd venture over to Kilburn and walk a circular 11mile route up onto Sutton Bank, passing Byland Abbey and the White Horse cut into the side of the hill near Roulston Scar.

We had an addition to the group this time as we'd "borrowed" Jinny the labrador from Donna's parents and she was along for the walk with us.

We started the walk from the car park next to the Forresters Arms in Kilburn at about 8:30am on a crisp, clear day with a breath of wind and some haze in the sky that we were hoping would burn off later in the day.

The first seciton of the walk takes you through fields towards the Abbey ruins and these were very waterlogged thanks to weeks/months of heavy rain which made the going quite hard (for those of us without 4 paws!) and muddy. 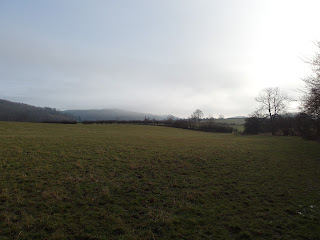 On passing the farm at Cams Head and the north side of the small Brink Hill you reach the impressive ruins of Byland Abbey and we spent a few minutes catching our breath and taking photos before heading back on to the path leading up into the woods towards Elm Hag. 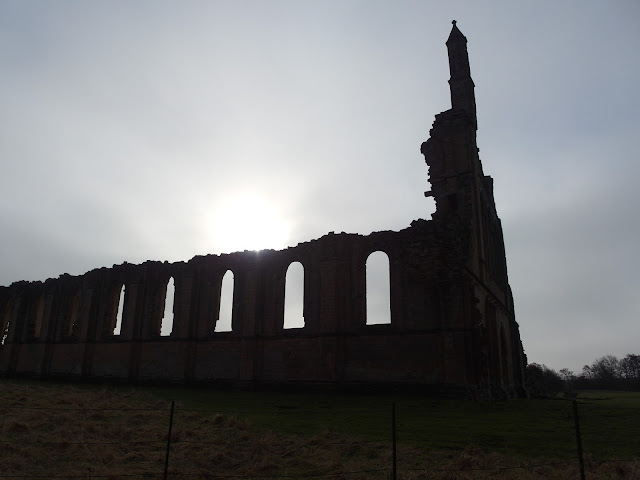 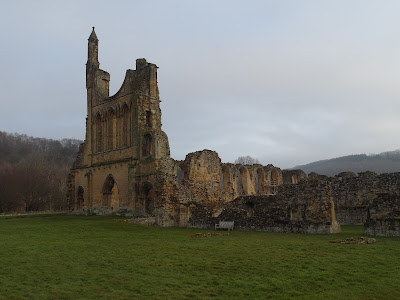 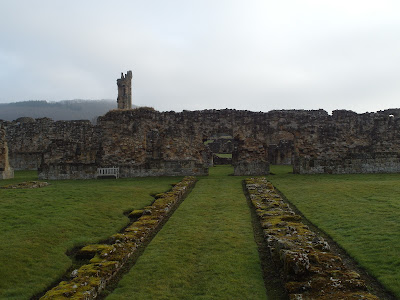 Once in the woods the path continues upwards and meanders through the trees until you reach the end of the tree line and pass out into the fields heading across Byland Moor towards Cam Farm & House. 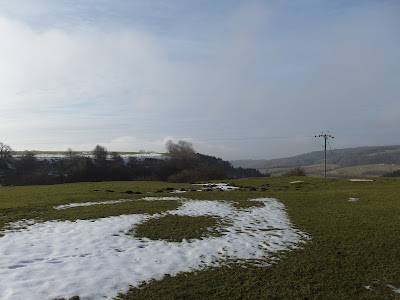 There was still some snow laying underfoot that had drifted up against walls and collected in the more sheltered areas but this disappeared on entering the woods again.

Once we'd passed Cam Farm we took the northern most of the 2 paths into Cockerdale Wood and followed the double track path through the woods that lead to Cockerdale Farm, out into the fields again and then back into the woods, passing the interestingly named "Hell Hole" and the small chapel at Scotch Corner
From Scotch Corner we followed the by-way for about a mile and then skirting (via the road) around the edge of the plantation before picking up the Cleveland Way for the last section of the walk; past Knowlson's drop, Roulson Scar, Ivy Scar and the White Horse just below the gliding club.

The last section of the walk drops down through the woods to the side of the steep (25%) road, coming out on to Carr Lane before the short walk back into Kilburn.

Surprisingly, with a maximum "high" point of 344m we climbed a respectable 439m over the whole walk - a different league from next weeks' walk in the Atlas Mountains but a great walk none the less and a fantastic day out in the North York Moors.

The route of the walk as recorded on my GS3 with View Ranger is available on Social Hiking;