Trail running and a few steps closer to triathlons... 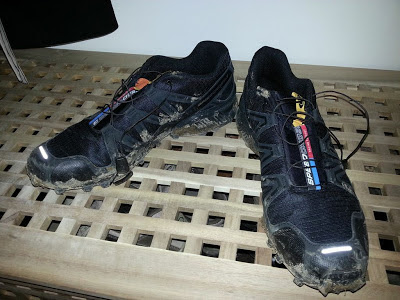 Today (Sunday 24th Feb 2013) was supposed to be a lazy day, a day where we did nothing strenuous and just "relaxed a bit" ahead of our trip to Morocco and the Atlas Mountains in 4 days time, but the alarm coming on at 6:30am kind of put pay to that!

We headed out for a walk in the New Forest, a 4 mile loop around Janesmoor Pond, nr Nomansland, in the Coppice of Linwood.

It's a nice walking or mountain biking route and one that I use as a quick night ride route or training ride in the summer as there are a few nice up and downhill sections and the trail is usually fairly compact and clear of mud.

The temp was hovering around zero as we pulled up at about 7:30am but the wind made it feel significantly colder and the ground was still frozen underfoot with any patches of water being completely iced over.
We weren't planning on taking any pictures on the walk so we'd left the camera at home which was a shame as we saw a few small herds of fallow deer on the edges of the forest.


Then on to some trail running....

So it's been frustrating me for some time that I don't run or can't run, or won't run - it's the last key piece to me attempting a triathlon and which ever reason I use not to run it annoys me and finally I've decided to do something about it!
A trip to Cotswold Outdoor and then Go Outdoors saw me return home with both a new pair of approach shoes (much needed since the demise of my Merril's in Canada) - Saloman X Ultra GTX - and a pair of Saloman Speedcross 3 CS trail running shoes.

I've seen a few articles in outdoor magazines (Outdoor Fitness etc) with reviews on the Saloman Speedcross and the general consensus on-line seems to be good; having not worn trail running (or even running) shoes properly before it was difficult for me to "know" if they felt right in the shop so it was a case of buying the pair that fitted and hoping that once out in the woods they'd perform as expected.

They certainly look the part, with Saloman's "Leightweight Muscle" chassis and Quicklace system (that basically removes the laces and allows you to secure the shoes in one pull of the cord) as well as some serious tread (Mud&Snow Contragrip) and a Climashield outer membrane there is more technology in these than my smartphone!

But would they perform on the trail and will I like it?
Before answering that a bit of background if I may....  I want to start doing some triathlons and as part of a relay team I'm doing the cycling leg of the Windsor Triathlon in June this year.
I'm getting more and more into swimming and, over the last 6 months, I've been steadily improving; I still love cycling - ok so my speed and current fitness need some work but I know I "can" do it.
It's the running that is (and always) has let me down; my knees aren't great and they've always been my ally in finding an excuse not to run but, thanks to lots of walking/hiking, they're much stronger than they've ever been.  I just don't really enjoy running on the road and every time I've been out running I've managed it once and then shelved it in favour of something else!
So I thought I'd combine the elements I love and feel at home in (the hills, mountains and countryside) with running and see where that gets me - I might still hate it, but it might be the key to getting my running and building up both my stamina and knees so that I can confidently enter a triathlon in full and not just cherry pick the elements (cycling / swimming) that I can do.

So, did they perform?
Yes, better than I did anyway!  The run was only short (3.2 miles) and terrain wasn't overly challenging but there were some hills (up and down), a few muddy sections and 100% of the run was off-road.

I'm not sure what an avg speed of 5mph is like but it gives me something to work on and a start point that previously I've not had. Most importantly my knees are ok and that gives me some hope that it'd just down to training and good old time & effort!


Social Hiking
Both routes from today (recorded on my GS3 with ViewRanger) are available on my Social Hiking page (here). I had a slight issue with the recording in that there is no break between the two activities so the morning's walk and afternoon's run are both joined - but you get the idea!