April 28, 2013
After last weekend's SUP lesson, subsequent board purchase and paddle on the Hampshire Hamble river we were itching to get back out on the water and on the boards and we'd been watching the wind and tide reports on WindGuru and XC Weather with eagle eyes all week looking for the ideal spot to paddle on.

Following our lesson we'd been added to an email list of SUP trips organised by a local boarder and there was talk of a trip from Lepe beach on the Sunday (28th April) morning but after exchanging a few emails we decided that it would be better for us to find a spot that we could get out on the boards on our own to practice and build confidence on the boards.

It was during another trip to AB Watersports in Gosport that we spoke to Andy about possible spots and decided to go and check out a few spots on Hayling Island - a place that, despite spending 30 odd years living in the south of England, I've never actually been to before! 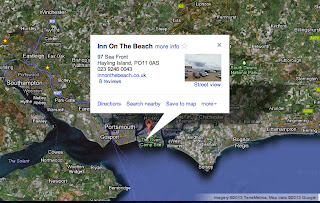 The two spots that Andy suggested were "Esso beach" (the small car park nature reserve just next to the Esso garage on the A3023) and the seafront near the "Inn on the Beach" - we checked out both spots, Esso beach being more sheltered but empty of water at low tide, and  the seafront looking idea for low and high water - as long as the wind allows.

Low water on the 28th April (Sunday) was due to be just before 7am and high water around 2pm - frustratingly the wind was forecast to be perfect up until just after lunch time so we decided to head to the beach on the seafront to start with and then go from there...

We arrived at the seafront just after 8am after stopping briefly at Esso beach and finding the mudflats completely exposed.  The sea was flat calm, no breeze, barely a ripple on the water and a small group of paddle boarders already a few hundred meters out from the beach - perfect, if a little cold - the temperature gauge in the car showing only 5 degrees!

So we started to kit up, inflate the boards and struggle into our wetsuits then headed out into the shallow water to get re-acquainted with the boards again - and try not to fall off. 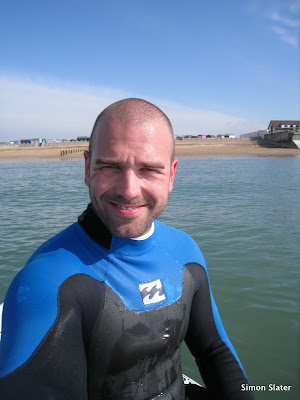 
We stopped mid-way through our paddle around the lagoon to watch a group of microlights flying overhead and then paddled back towards the area in front of the car park to "play" in the small waves and try to get used to the different boards and various stances which involved getting wet, a lot!

Donna decided, whilst a spell on my board to try some Yoga moves - fairly successfully in my opinion but I think I'll be leaving the yoga moves to her, I'm happy with trying to catch some waves;


Donna getting in some Yoga practice on my SUP!!

Around 10:30am, after a few hours of paddling, the wind started to pick up as forecasted and small, choppy, waves were starting to appear making paddling more difficult so we headed back to the beach opposite the car to warm up with a cup of hot chocolate before packing up and heading home.
andy biggs watersports hayling island isup kayack magic seaweed paddleboard red paddle rrd sea stand up paddleboarding sup windguru xcweather yoga
Location: Havant, Hampshire, UK