Scrambling on Skye & lessons in confidence! 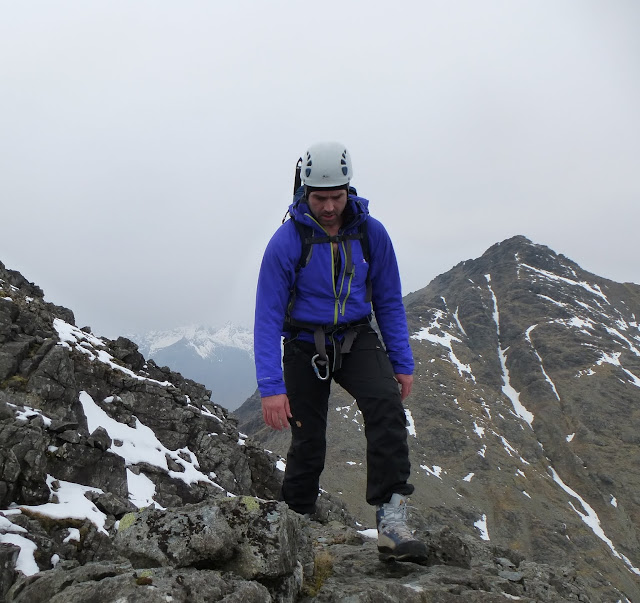 As part of our week long stay on Skye we'd arranged to do some scrambling on Clach Glas & Bla Bhienn with Mike from Skye Guides - something that we were both equally as excited and apprehensive about as the mountains of Skye are renowned for being a harsh and inhospitable place at the best of times and the recent news of a walker going missing 4 days prior to our trip (the search was unfortunately scaled down and stopped without finding him) had really driven this fact home.


We met Mike at the foot of Bla Bheinn, in the car park just off the Elgol to Broadford road, at 8:30am with the weather "ok" and not raining but that was about as good as I can say - the forecast was for rain (or snow higher up) later on in the day and there was still a good covering of snow visible on the tops. 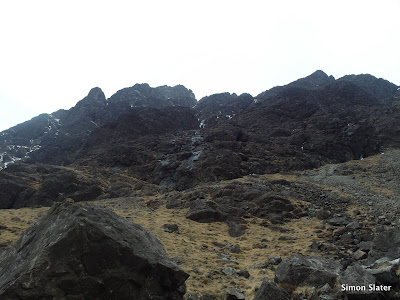 After a quick hello we had a check to make sure we had adequate boots (I wore my Scarpa Chamoz for the trip as they can take crampons, B2 rated, and are lightweight enough to make walking and scrambling comfortable), had our crampons & axes with us and had harness/helmet that fitted correctly.  Then it was off, along the path leading up to the start of the scramble, passing An Stac (528m) on our left and following the course of the stream/river Dunaiche which flows out into Loch Slapin before turning right and following a NW course into Chorie a'Caise and then up the the NE flank of Clach Glas to the small flat area referred to by Mike as the "putting green".

Whilst walking Mike had been assessing our abilities and fitness with a few simple scrambles and questions about where we'd walked before and the type of experience we "thought" we had.  He also talked through the fact that we'd be roped up as a three and that he'd be alternating between leading and being at the rear of the group depending on the type of risk and how we were moving.

Once on the putting green we stopped to put on harnesses, have a drink and have a chat about the type of terrain that we'd be walking/scrambling over on our route across Clach Glas and onto Bla Bheinn.

We started up the side of Clach Glas and it rapidly became apparent to me that this was way more exposed than I was used to and exposure is something that I try (and want) to deal with but it's taking time and this was pushing my way out of my comfort zone.
The difference with the rock on Skye, especially in this area, is twofold;
1) the rock type is Gabbro which is volcanic and amazingly grippy even when wet but due to its amazing abrasiveness it has the ability to shred gloves and clothes that come into contact with it
2) there are very few waymarked paths through the mountains on Skye due to the incredibly rocky areas and the fact that rocks calving off the mountain leaves very narrow ridges and unstable patches of rock that can change from year to year

It's worth having a read of the Wikipedia page on Skye (here) as the geology of the island is amazing as is the volcanic activity that causes the Cuillin ranges...

We scrambled up, on rope, a small section of wall and then started to move towards a large outcrop of rock that Mike referred to as Skye's Matterhorn.... and then things went a bit pear-shaped!
We were on an exposed shelf/ridge running up towards a tower of rock that we had to move over and I started to think too much and worry that we'd get further and that I would either lock up or be in a position where I wasn't enjoying it - in truth I was already firmly in that position and my willpower to keep going was rapidly deserting me.  650m with air all around you feels a hell of a lot higher!!

One of my failings and something that I am constantly trying to change is that once I convince myself that I'm not going to do something there is nothing that will convince me otherwise and as Mike had said there were a few very airy/exposed sections coming up my head said "hell no" so it was with gritted teeth that I had to shake my head and say "sorry Mike we're going to need to go a different way".

Now reading the above you may think; "surely you should have given it a go" or "was it really that bad" - yes and no respectively BUT there and then the answer was No and Yes - simply put I need to go back and do it again after building up my confidence and growing a pair of balls!


So we headed back down to the putting green and then picked a route to the summit of Sgurr nan Each (623m) that had some scrambling involved but not quite to the level of Clach Glas.

This route, much to the approval of my heart rate, was much easier and the scrambles involved were not as technical or exposed.  There was one "step" that involved stepping just over a meter from a jutting out boulder onto a foot hold on a wall and then scrambling up onto flat ground - fine you say but with nothing below you for a few hundred meters this did give me cause to pause slightly before stepping out into thin air to grab at the opposite wall!

We stopped on the summit of Sgurr nan Each for a spot of lunch and a hot drink - wrapped up in waterproof layers as shown in the picture below to stave off the wind and snowflakes that were starting to blow in.

After lunch we headed on a SE course along the ridge of Sgurr nan Each leading us back into the Corie and it was while walking down here that we disturbed a Sea Eagle (or White Tailed Eagle).

Unfortunately no one was quick enough with a camera to get any pictures but just the sight of this amazing bird (average wingspan around 7ft and weighing up to 7kg!) was enough for us - we watched it floating over the corie and over to the hills of Clach Glas and Bla Bheinn showing none of the apprehensiveness that I had earlier; oh for a pair of wings!
Mike explained that, while stunning, the Sea Eagle was doing a very good job of pushing out the smaller Golden Eagle from the area and he was concerned as the hill were on is known to have a Golden Eagle nest nearby...

After the excitement of the eagle we found ourselves on a large scree patch which formed the last section of the descent before reaching the Corie and path back to the car - taking the lead from Mike we glissaded down the large banks of scree with plumes of rock and dust billowing behind us - great fun but it does occasionally go slightly wrong and you end up on your arse in the rock!

Once back at the car Mike suggested that we head over to the Honeycombe rock near our cottage in Elgol to try some abseiling and climbing on the rocks.

The abseil was about 15m and, after roping up and setting up the safety lines, we both had a few descents down on the pebbled beach area before heading back to the cottage with Mike for a "nip" of whiskey and a promise to come back for another trip after we'd gained a bit more confidence with exposure and I'd "grown a pair!" 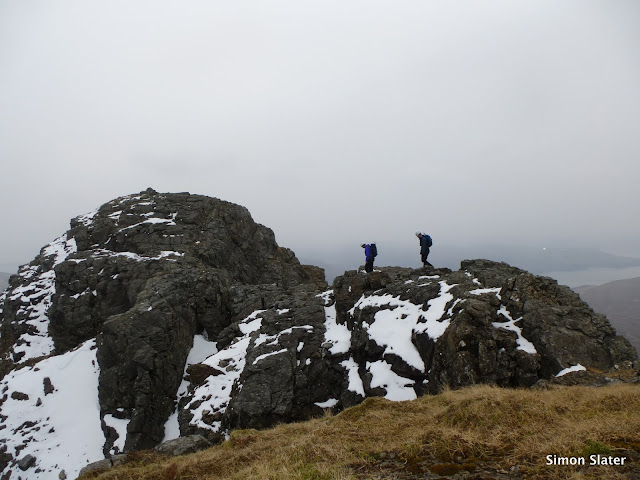