April 28, 2013
After an amazing week on Skye we decided to visit one of the more iconic parts of the island before heading across to the Cairngorms for another week of walking and climbing.

Most people will have heard about, or seen pictures of, the Old Man of Storr and most people will, at a guess, walk from the car park on the side of the A855 up to the strange rock formations that have calved away from the main face of Storr, take some pictures and return to the car.

In itself this is a nice walk and the views looking back across The Old Man of Storr, Needle rock and on out to sea are amazing but we decided that it would be good to include a bit of scrambling and planned a circular route taking us past the rock formations (an area called the Sanctuary), up to the summit of The Storr (719m) and then down the route of the stream near to Bealach Beag and back to the car - all in all a fairly short walk of just over 7km.


The climbing starts straight out of the car park as the trail winds its way up through the woods and with the smell of the pine trees is seemed more like a Canadian mountain path than a footpath on Skye!

The wooded section is over fairly quickly and the path heads out onto open ground covered in heather and studded with the rocks that have fallen down from the cliffs over time and the bulk of the Storr towering above.

As we reached the rocky outcrops below the cliffs patches of snow started to become visible on the higher cliffs and I started to wonder how much snow would be lying on the Northern and Western slopes higher up - leaving the crampons behind could have been a mistake!


We stopped just past the towers of The Old Man (around 500m) to take some pictures and have a brief rest before heading on up along the well marked path towards the Needle rock passing the small, unnamed, lochan on our right. 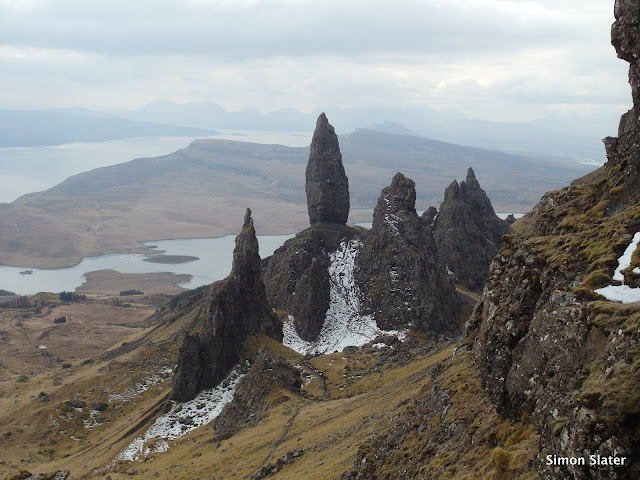 At around the 500m mark there is a small plateau and outcrop to the right of the path that is a popular spot to take pictures of the rock formations and its probably for this reason that the path ends here and there is no discernable route up the cliffs to the West.

We picked out a route up the cliff side that looked fairly simple and started to head up a large loose bank of mud and rock that looked to have recently slid down under the weight of the snow - the scramble up was easy enough but the loose rocks and lack of hand holds made for a few nervous moments while looking for the next hold.

Once above the cliff side the terrain opens out onto a large cirque or corrie that was fully snow covered - steepest to the SW, leading up to the Storr, and easing off as the ridge runs northwards.

There looked to be a few good gullies that would make for a reasonably easy ascent to the Storr plateau but Donna's lack of winter boots and our lack of crampons put pay to this idea before we'd even started to think about it in more detail. 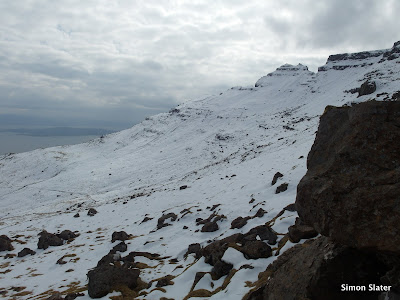 Taking into account the snow cover, Donna's boots and our lack of axes/crampons we took a slightly longer path across the corrie towards a slightly less snow covered patch of ground to the left of a steep rock bank.

Once at the rocky outcrop we skirted around to the left, following a snowless area of grass and rock that became a scramble before topping out on the plateau of the Storr.  From here it was an easy walk up the snowy flanks to the summit cairn, passing a few sets of tracks that "suddenly" appeared at the top of the two gullies that we'd spotted back in the corie.


Once on the summit we stopped to "have a look around" and take some pictures of the stunning views - back over Loch Leathan and the Sound of Raasay - and also of the bunch of flowers that were left on the trig point at the summit.

I've no idea why these were left here, or by who, so if anyone has any ideas or can shed any light then please let me know! 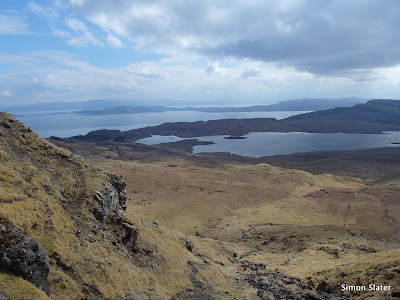 From the summit we headed back down the SW flank of the Storr, towards the cliff edge above the Lochan a Bhealaich Bhig and from here followed the course of a small stream and rocky path down to the valley below.
It's worth pointing out that due to the lack of rain over the last few weeks there was almost no water at all in the stream so the walk down through the rocks was fairly easy with the use of hands needed only a few times - but after rain or after snow melt then I'd imagine this route would pose some difficulties.

Once back down onto the lower flanks, around 300m we descended back to the road, following a well trodden path back towards the road, stopping a few times for some pictures looking back towards Storr and the rocky outcrops. 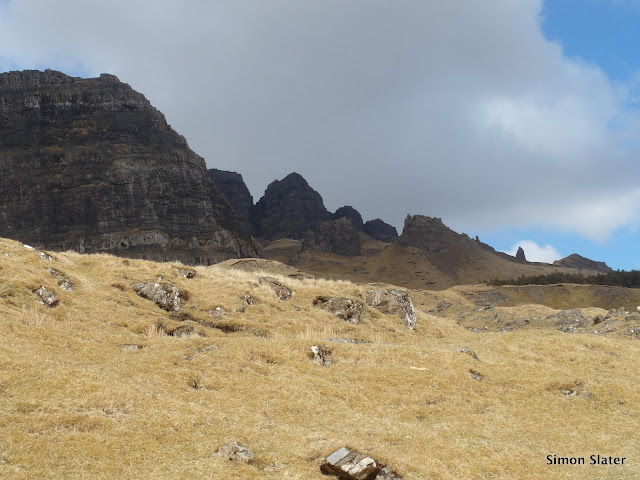 Panorama from summit of The Storr (click to view full-size)

It was a great walk, despite the fact that I wish Donna had worn her mountain boots and we'd taken crampons as this would have made the ascent from the corie much more interesting, and it's easy to see why so many people come here and photograph the rock features but its the view from the top of the Storr that won me over and one that will be printed out and mounted on the wall at home to remind me for years to come.

Route map on Social Hiking (recorded on my GS3 with ViewRanger)