Wales in a day - a trip to the Black Mountains

"What about a day trip to the mountains somewhere - we haven't been in ages" was Donna's suggestion when trying to think of things do over the upcoming bank holiday weekend, a great idea!
For good reason, we hadn't climbed anything higher than a staircase since Donna was pregnant with Isabelle (who's now 4.5 months old) and my parents we're more than happy to entertain her for the day while we took Monty, our English Springer Spaniel, on the 2hr ish drive to Crickhowell for a 9 mile circular walk in the Black Mountains.

We picked the Black Mountains for a number of reasons; it's probably the closest area of decent hills/mountains to us, the drive just about ok for a "there and back" trip in a day and we haven't really walked much in the Black Mountains - our only decent walk there was back in April 2012 (you can read about that here).

So after packing up the car with walking gear, Monty and his "gear" and Isabelle and all of her things for the day we headed off, first to drop Izzy off at my parents and then to our starting point in Crickhowell.

There's a large pay & display car park in Crickhowell, just off the main high street next to the information centre, that charges (at time of writing) £2.50 for over 4hrs and there are also a few decent outdoor shops in the town - I only mention this as I managed to forget my walking socks so had to buy a new pair en route!

The route I plotted (using Trailzilla) for the day's walk was a circular route of just over 9 miles taking in Table Mountain (451m) and the higher peaks of Pen Cerrig-calch (701m) and the slightly higher Pen Allt-mawr (719m - meaning "top of the big slope" and is a subsidiary summit of Waun Fach) - you can download the intended route here although that actual walk was slightly different (there's a link to the ViewRanger plot and GPX download at the bottom of this post) as we altered the last few miles.

From the car park behind the information centre you follow the main road (A40) for a few hundred meters through the town before turning off onto a smaller road leading up hill through some houses and then, as Table Mountain comes into sight, you turn off onto a farm track which eventually becomes a footpath and, for me, the real start of the walk.

You leave the road at around 200m so there's a fair bit of ascent up to the 451m summit of Table Mountain and it taunts you all the way up as it fills the skyline ahead of you - for us it was a good chance to warm up as the morning started fairly chilly and, once out of the series of livestock fields so we could let him off his lead, it gave Monty a good chance to stretch his legs and remind us that he was (and would remain) much quicker and fitter than we were!

Table Mountain (Crug Hywel in Welsh) itself once held an Iron age hill fort and the earth/stone ditch and ramparts are still clearly visible - the views from here on a clear day are great; Crickhowell and the river valley to the south and the Black Mountains stretching off from NW to NE.


Once the summit of Table Mountain has been reached, and passed, there is the inevitable short descent before the longer climb (250m approx.) to the summit plateau of Pen Cerrig-calch (701m) and Monty was proving his stamina by continually stopping and looking back at us as if to ask why we we're keeping up with him.

To the West, across the valley, we could see ominous black clouds but thanks to a fairly decent breeze the sky's above us were fairly clear and visibility was great. 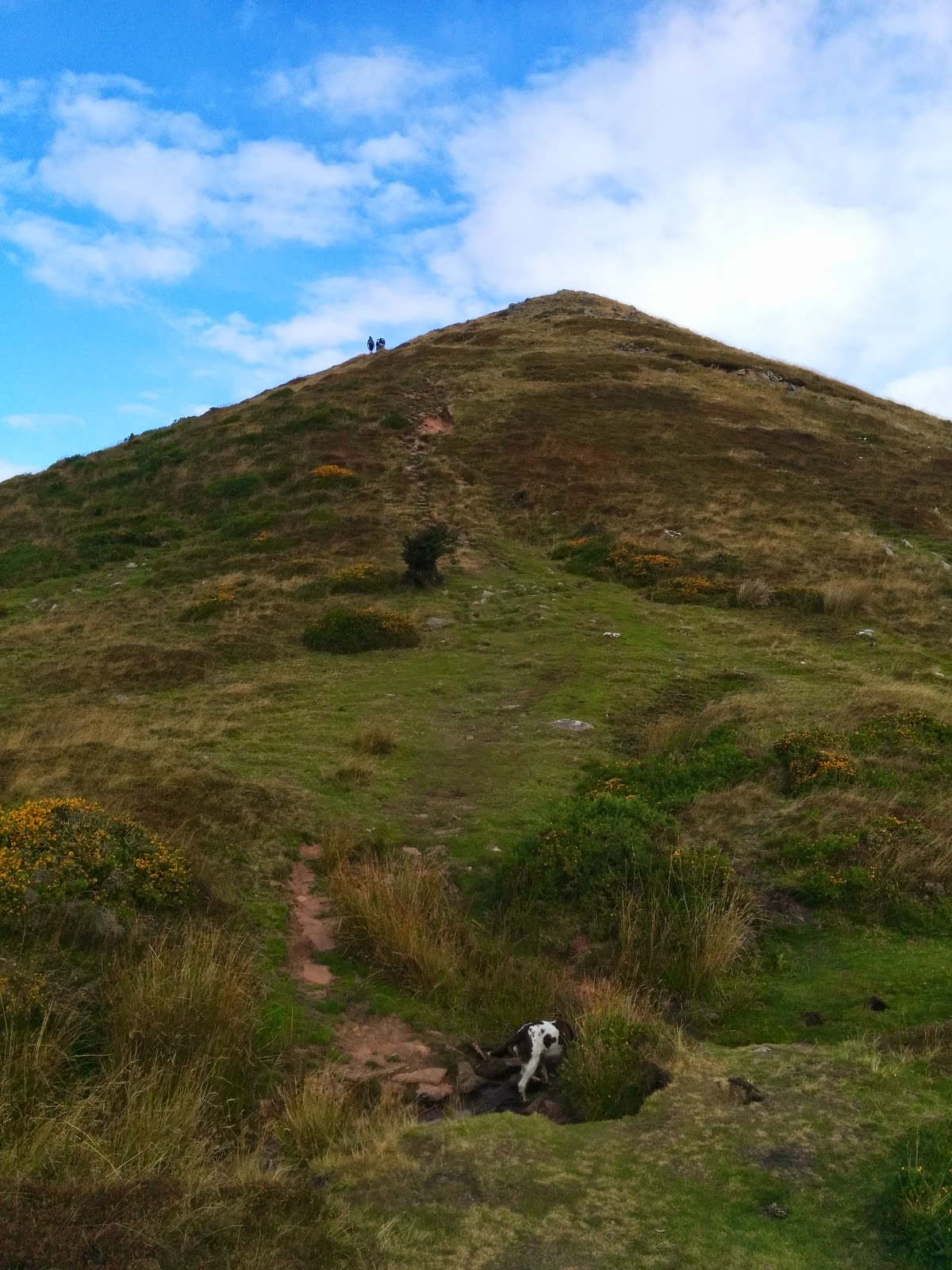 On reaching the summit of Pen Cerrig-calch the plateau stretches around 1.5km, dropping slightly around half way before climbing to the higher summit of Pen Allt-mawr.

There are a number of shelters dotted around on the path between the two summits and these provide a welcome break from the wind that, due to the fairly narrow plateau top, can be fairly brisk along this section.

As we headed between the two tops the rain caught up with us and, whilst only a 10 minute shower, forced us to stop to don waterproofs and as a result we opted not to stop in the shelter for lunch but to carry on to the top of Allt-mawr for a break hoping the weather would pass.


Around 1.5km from the summit of Pen Allt-mawr there is a fairly decent sized shelter of stones and, as we were only heading to the summit and then returning we decided to stop here on our way back for lunch as it was out of the worst of the wind and the rain looked to be heading our way again.

The summit of Pen Allt-mawr itself is fairly flat topped with the summit cairn and trig point at the northern end of the small plateau top and from here the land drops off fairly sharply along a well defined ridge before being joined (from the SE) by a path that loops you back around both of the higher summits before re-joining the path we headed up on between Cerrig-calch and Table Mountain - while we didn't see too many people on our walk (another reason why, on a Bank Holiday, the Black Mountains is a great choice) all of them were opting for this route back to Crickhowell but as I'd pre-decided that we'd take a different route and we had our lunch stop picked out we, after a few pictures, turned around and headed back the way we'd come.


Lunch was, as always on the mountain, a fairly brief affair and in the stone shelter it was lovely and warm out of the breeze. I'd decided, as it was only a short walk, not to bring the stove for tea, opting for a small flask instead but due to the passing of Donna's granddad earlier that morning we decided on a swig of whiskey instead as a mark of respect.

On the subject of packing, here's a quick run through of the kit I took along for the walk - taking weather, time of year and walk length into account;

After lunch we were hit by a brief rain and hail shower - well it wouldn't be Wales without a bit of rain would it - but this passed quickly enough and we headed back, retracing our steps, to the saddle between the two peaks.  From here we'd decided to go "off piste" slightly and follow the 625m contour line around Pen Cerrig-calch before dropping down off the hill to the west of a steep rock fall named on the map as "Darren"and then to pick up the main path back through the fields and into Crickhowell.

This plan worked pretty well up until the last 200m or so when we encountered dense, high, bracken that covered the lower part of the hillside all the way down onto the path - this took some time to work through and wasn't ideal although Monty had a great time "path finding" for us with me following the shacking bracken tops as he completely disappeared beneath it.


The last section from the main path and back into Crickhowell was, initially, through a wooded strip that follows Cumbeth Brook and gave us time to get our breath back after fighting through the bracken.  From the end of the woods and field system you drop back in to small road through the housing estate and we both remarked on how out of place we felt and how surreal it was to be in amongst houses and cars after being up on a deserted hillside only half an hour or so ago - another benefit of the Black Mountains as they are so accessible from a relatively built up area.

All in all a fantastic little walk with great views (despite the brief showers) - reminding us both why we love the hills and mountains of Great Britain and whetting our appetites even more for our 10 days on the Isle of Skye in a few weeks time.

Route map recorded on Nexus 5 with ViewRanger, via Social Hiking;