Rising from the shore of Loch Slapin to an impressive height of 928m, Bla Bheinn (Blaven) is an outlier to the Black Cuillin's and is thought to mean Blue Mountain from a combination of Norse and Gaelic.

We'd planned in one "decent" walk during our week on Skye and this was it - the summit of Blaven (or Bla Bheinn) that had eluded us 18 months ago when we had our scrambling session on the very same mountain and had to change plans - you can read all about that here!

So, leaving Isabelle and Monty with my parents, we had an early breakfast and headed off along the single track road from Elgol to the car park on the NW side of Loch Slapin and at the foot of Blaven - the morning was cool and the sky was hazy but the sun was already starting to make its way through the haze and we both hoped that we could get off the lowlands before the midges descended on us!

From the car park the path follows the small river of Allt na Dunaiche and past a number of lovely waterfalls, rising gently to around the 200m mark (around 1.3 miles) before the ascent starts to kick in and you climb steadily through Coire Uaignneich to around 450m - 1.9 miles in - the top of the trail marked on OS Explorer maps and the end of the heather/scrubland and on to rock and scree.

The next 0.8 of a mile really takes it out of you, the walk and scramble(s) along and up the southern face of one of the Eastern ridges of Balven are both dramatic and breathtaking while being tricky underfoot. 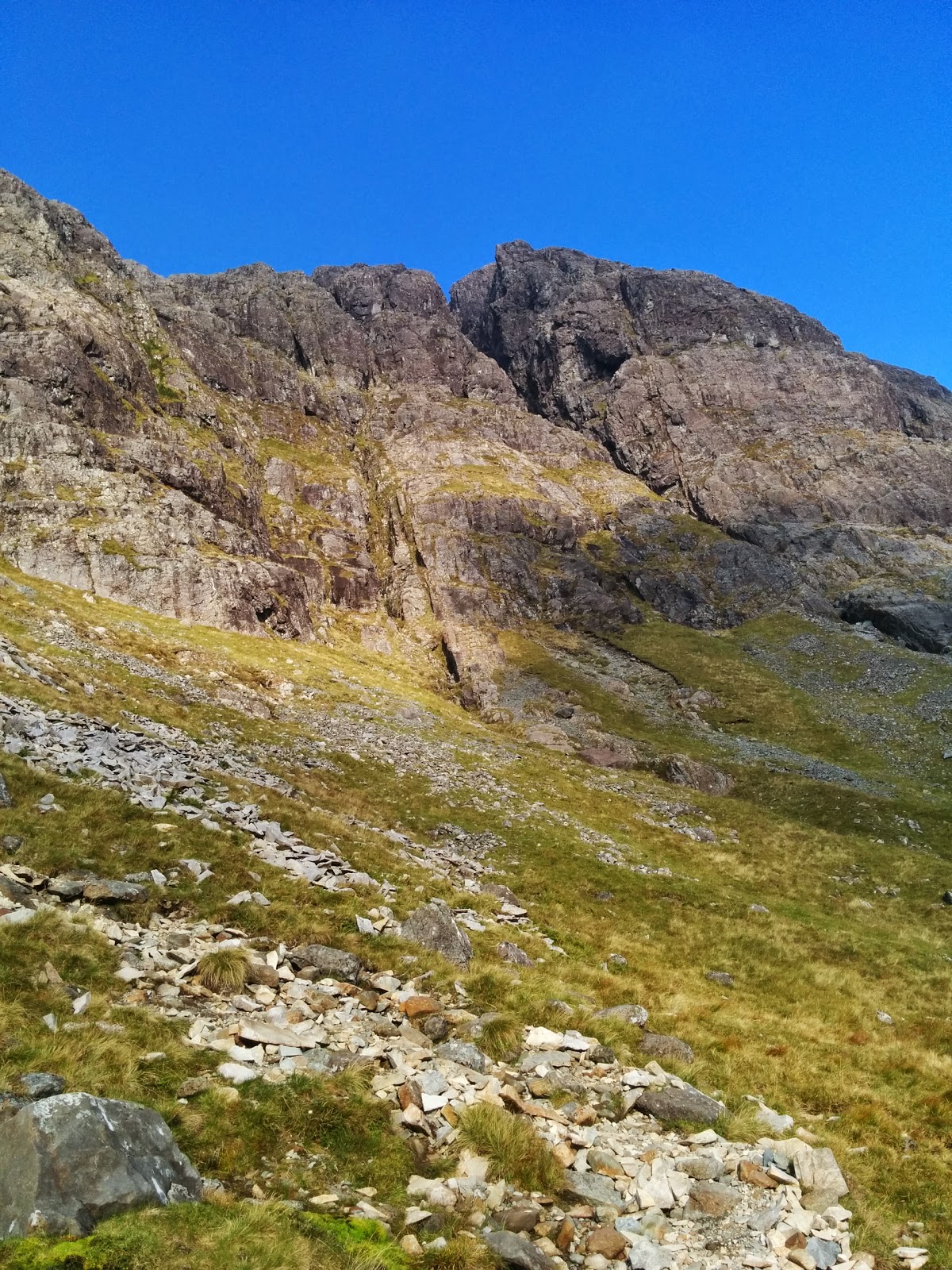 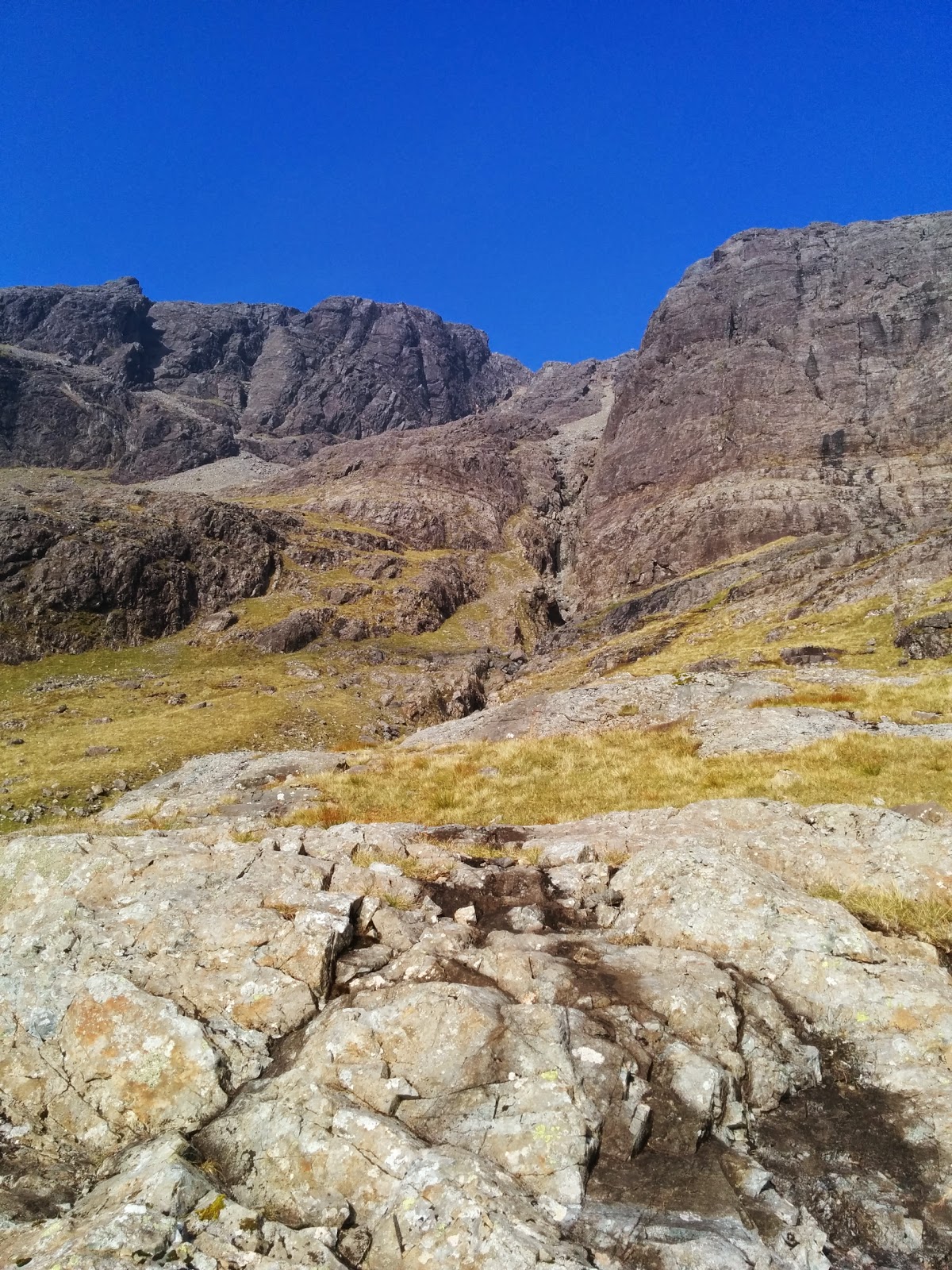 The views back at every point of the climb are stunning and despite the haze we paused many times both to take photos and to admire the view (and possibly to catch our breath!), looking back into Fionna-Choire and down on to Loch Fionna-choire is a sight that made the climb more than worth it and kept us going up the very steep scrambling sections that lead up the final section of the mountain. 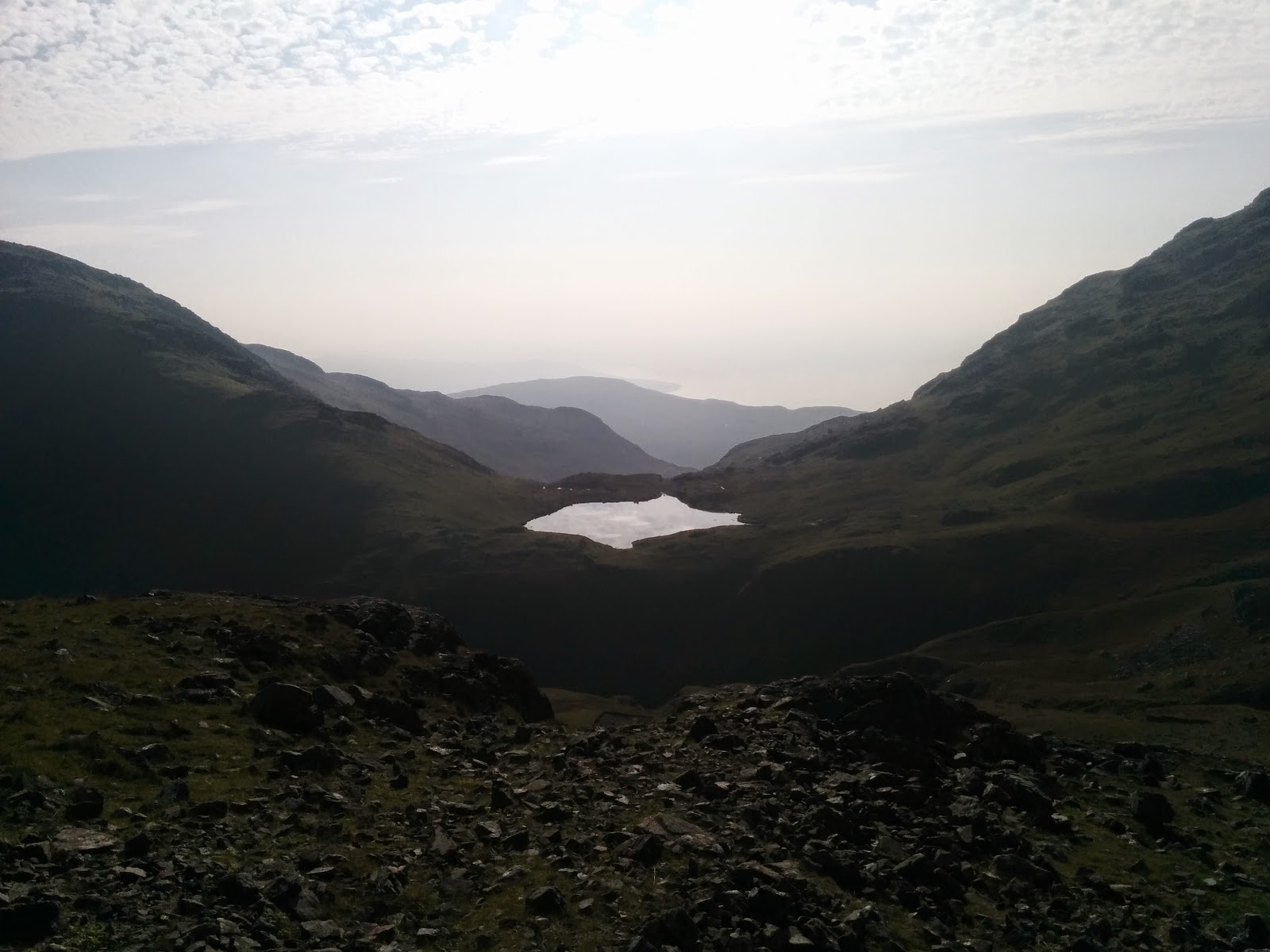 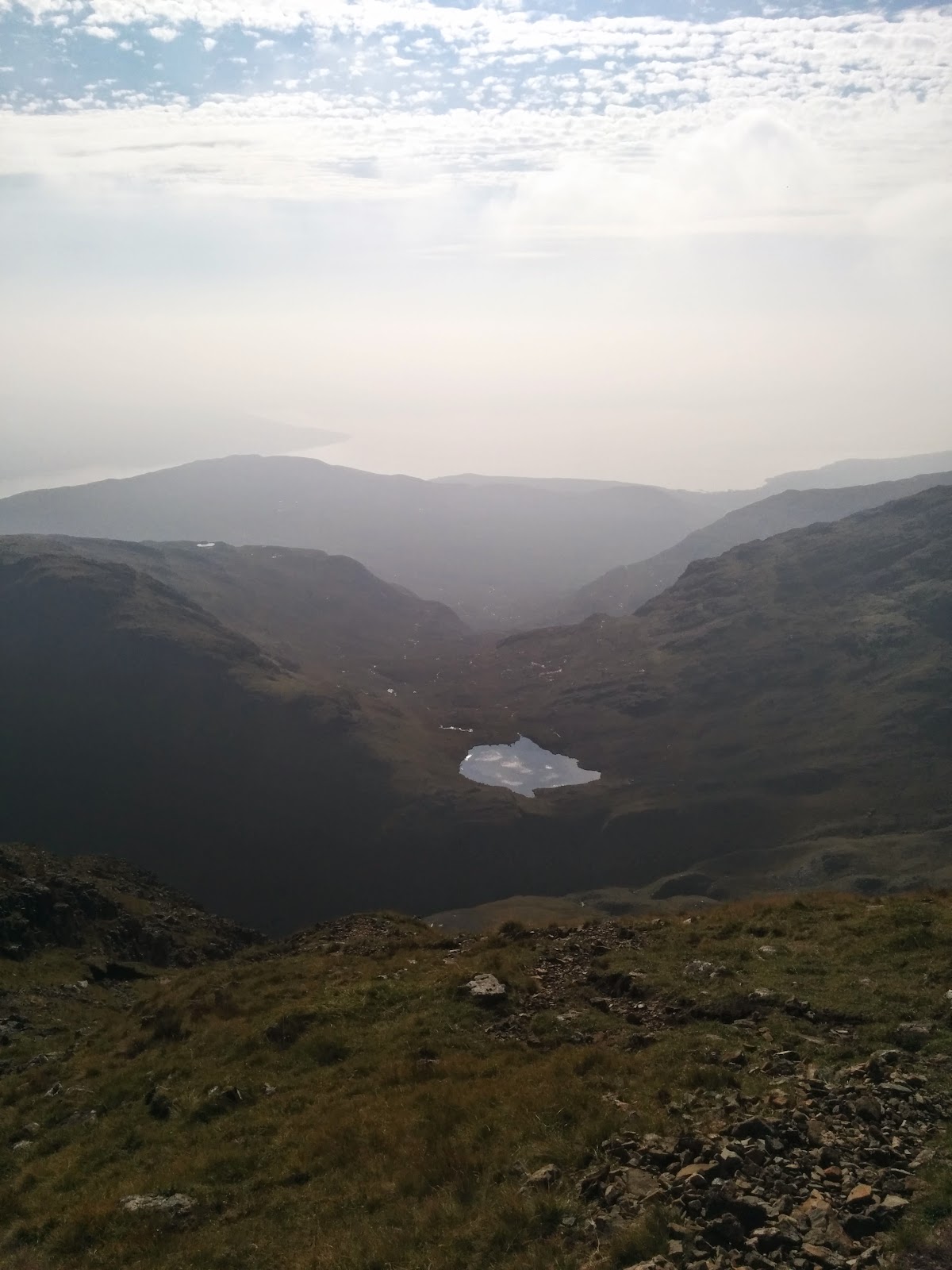 As you near the top there are more and more exposed sections with severe drop offs and rocks with huge overhangs and you can see why the Cuillin's get their reputation for being such an awesome and dangerous place to walk and climb.

Just before the small summit plateau there is a scrambling section that is (or was when we walked it) very lose underfoot and demanded some serious attention to footwork, especially on the way back down, but once you're past this the short path to the summit comes into sight with the trig point standing proudly at 928m. 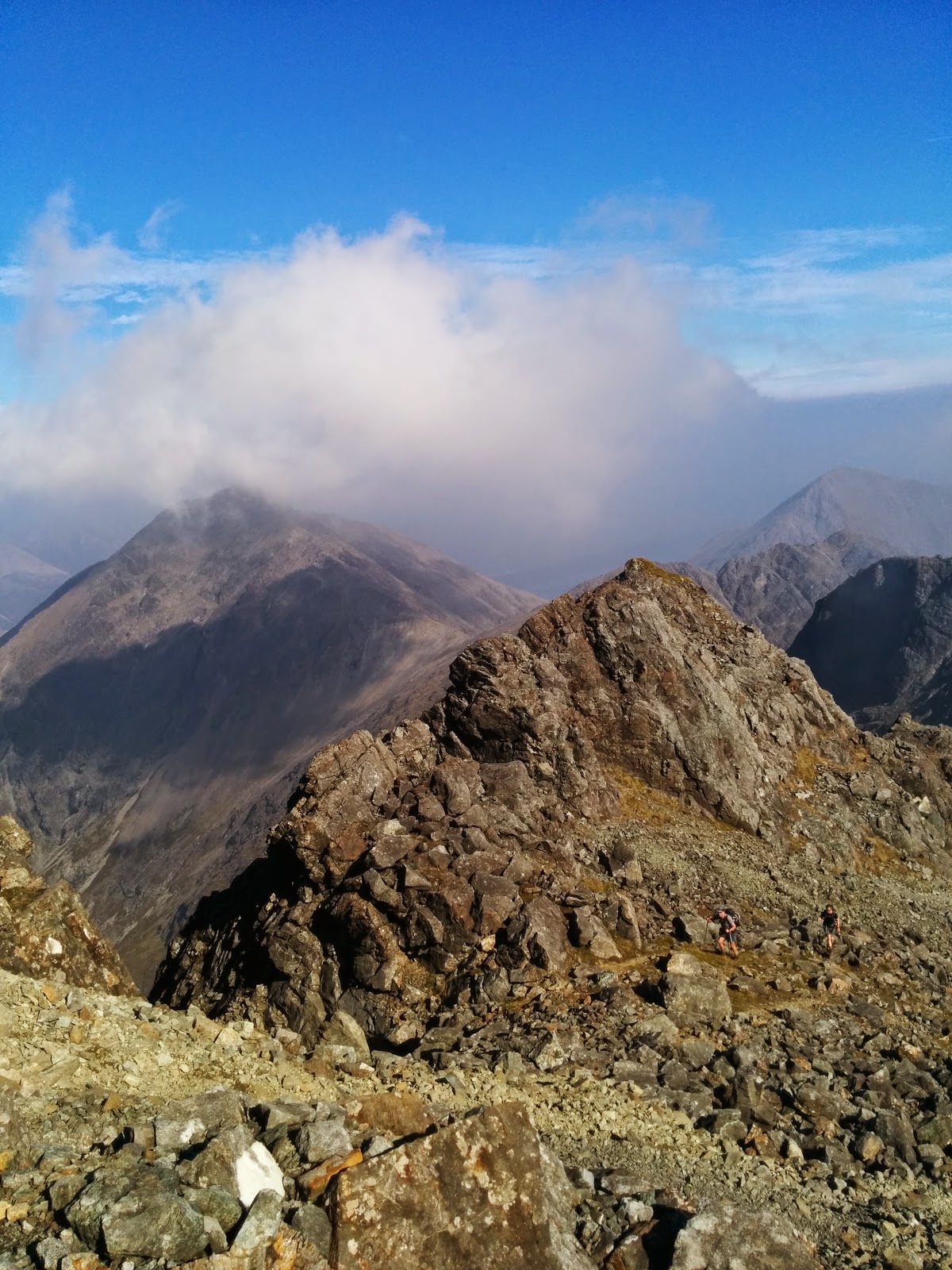 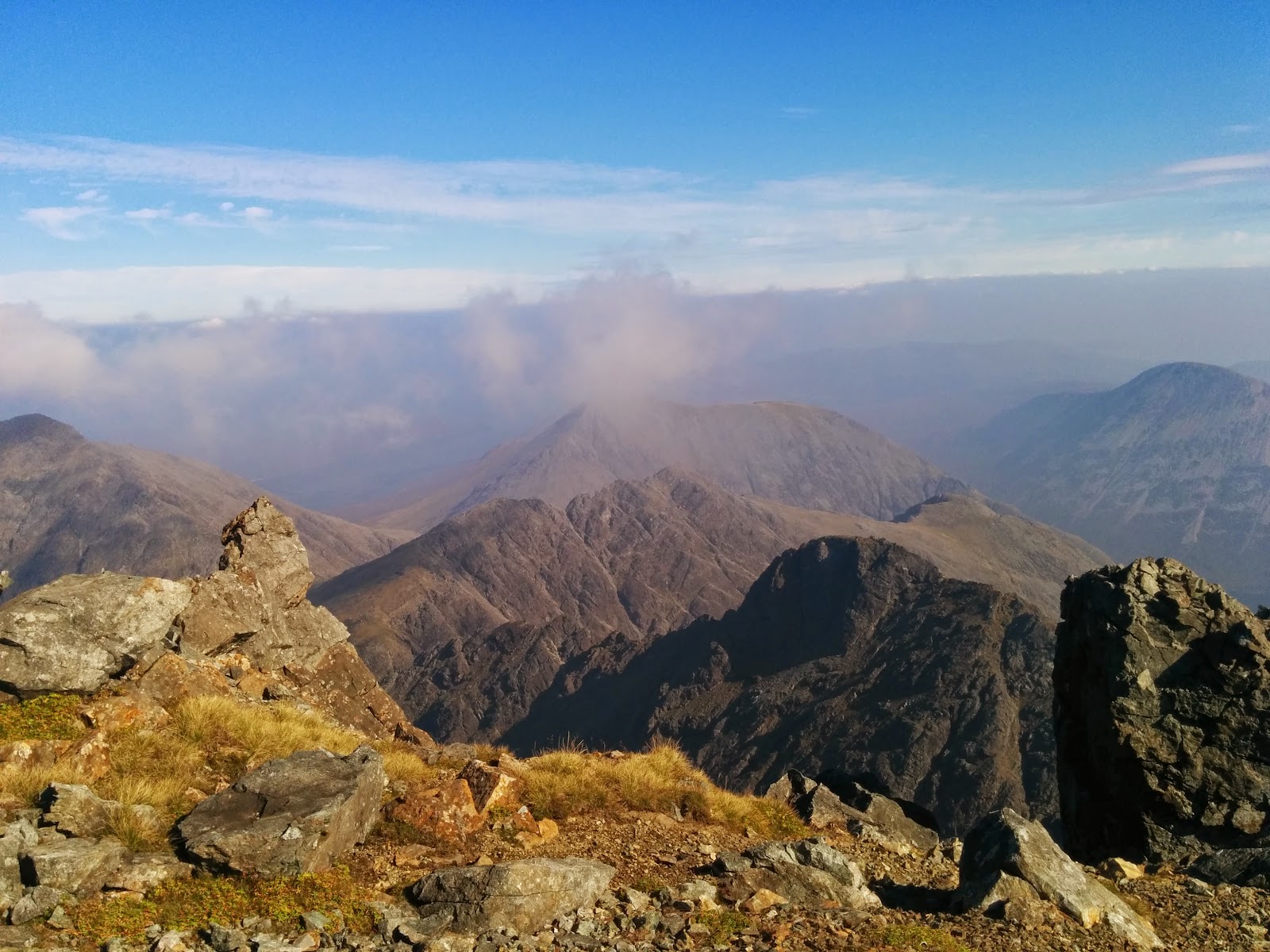 The views from the summit are amazing - not really a lot more I can say than that to be honest, I hope the pictures do it some justice (including the Google PhotoSphere image below).


All in all the walk, although short, was fantastic.  Yes we were lucky with weather and this enhanced the views from the summit and combined with the scrambling made this walk one of my top 5 mountains.  Not least because it removed some personal demons for me - ok we didn't complete the ridge section that we'd set out to do in April 2013 but it was a step in the right direction and made me even more determined to come back again and push myself that little bit more on the mountains of Skye. 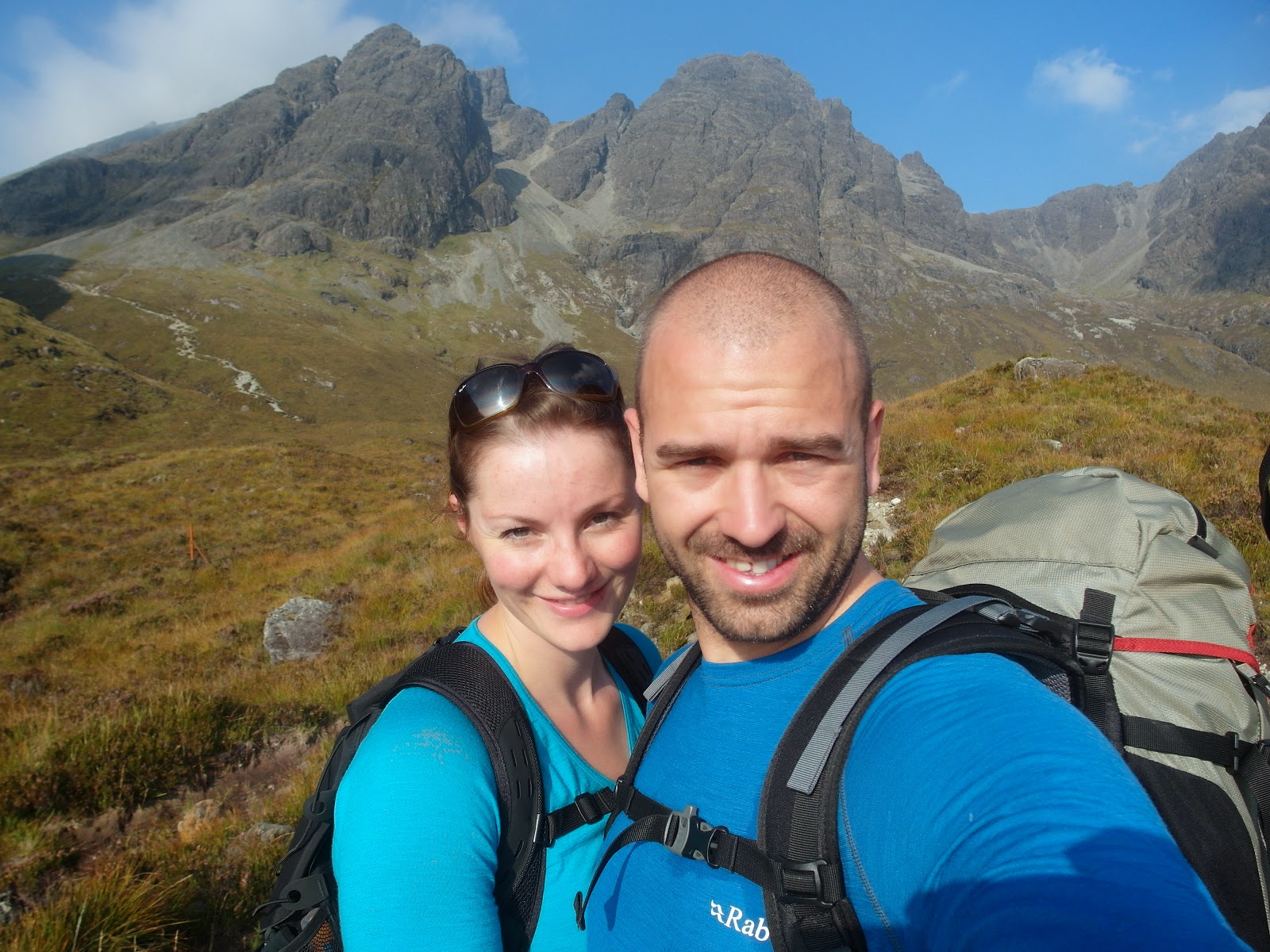