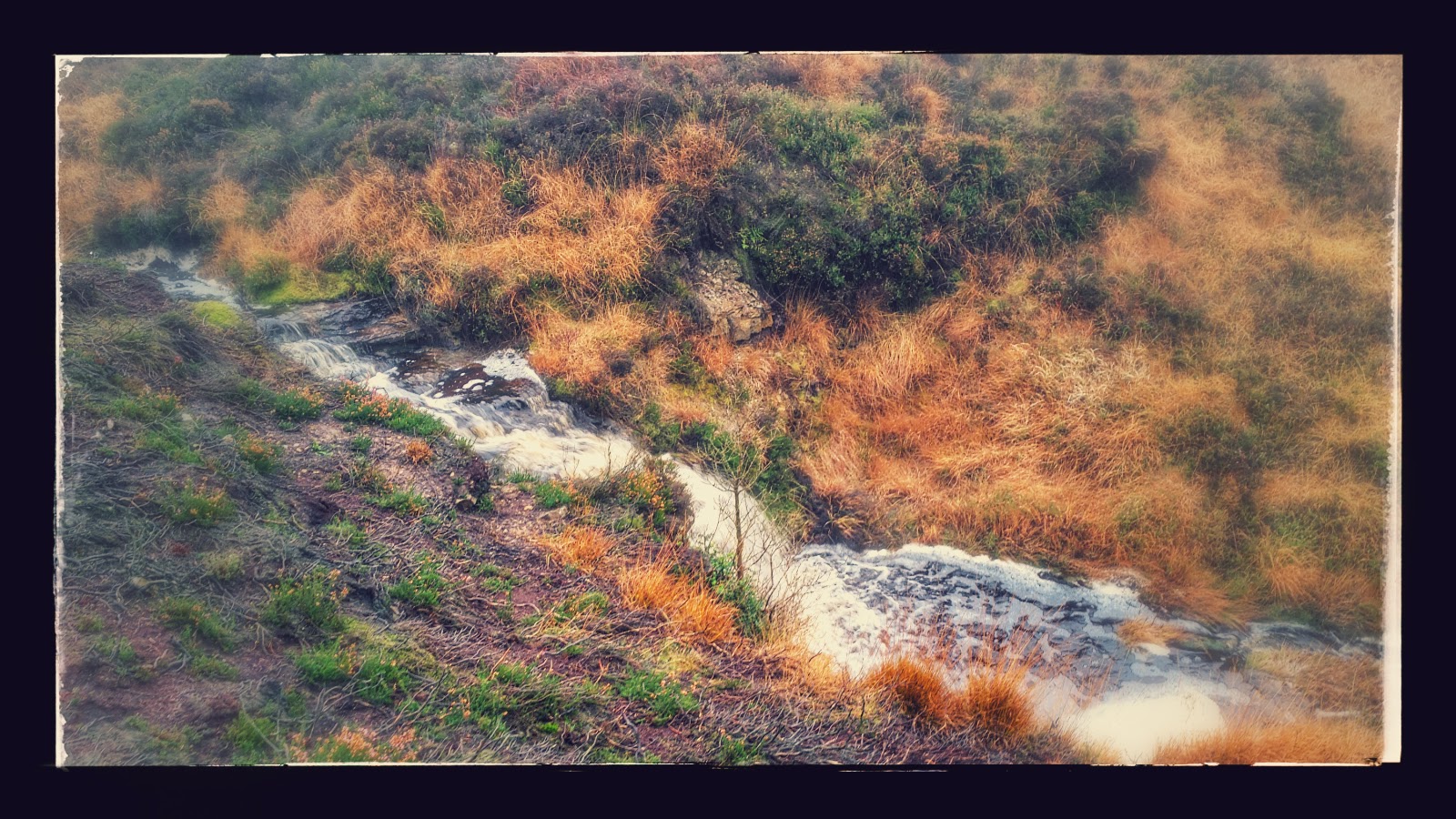 "I've booked us a challenge for 2015 - but we need to start training....." were the words that greeted me on arriving home from work one evening last week.
Now the last time I hear those words we'd booked up to climb Mt Toubkal in Morocco and as it was to be a joint event I wasn't overly concerned - until I found out what the challenge was!

Oh, and you need to complete it within 24 hours!!!
(link to SRMT site here)

Originally run in the 70's and 80's the crosses walk is being resurrected for 2015 to celebrate the 50th anniversary of the Scarborough and Ryedale Mountain Rescue Team and Donna decided that we should "have a crack" at it.
So yes, we need to get training, lots!

While I let the realisation of walking 53 miles in 24 hours sink in a number of thoughts started to run through my mind; when will we sleep? will we sleep at all? what do we need to take? (oh I love a kit list) and not least this - at a 3 mph average that doesn't leave to much time for sleep and who can keep a 3mph average for that long over broken, moorland terrain?

Anyway, it was booked, the time to worry about the finer details would come later.  What was important now was to plan in some training walks building up to 30-40 miles before the event and before the Ben Nevis Challenge (walk, cycle and canoe) that I'd signed up for in the middle of June 2015.

York Moors, our first "training walk"
We planned our first walk to be on the North York Moors as we'd be in the area staying with Donna's parents for a long weekend and more out of coincidence than anything else the route I found via TrailZilla started in Goathland which was to be the start for the Crosses walk some 8 months later.

The 10 mile route would take in 3 of the moorland crosses; York Cross, Ann's Cross and John Cross, and would be mainly walking on open moorland with some woodland paths. 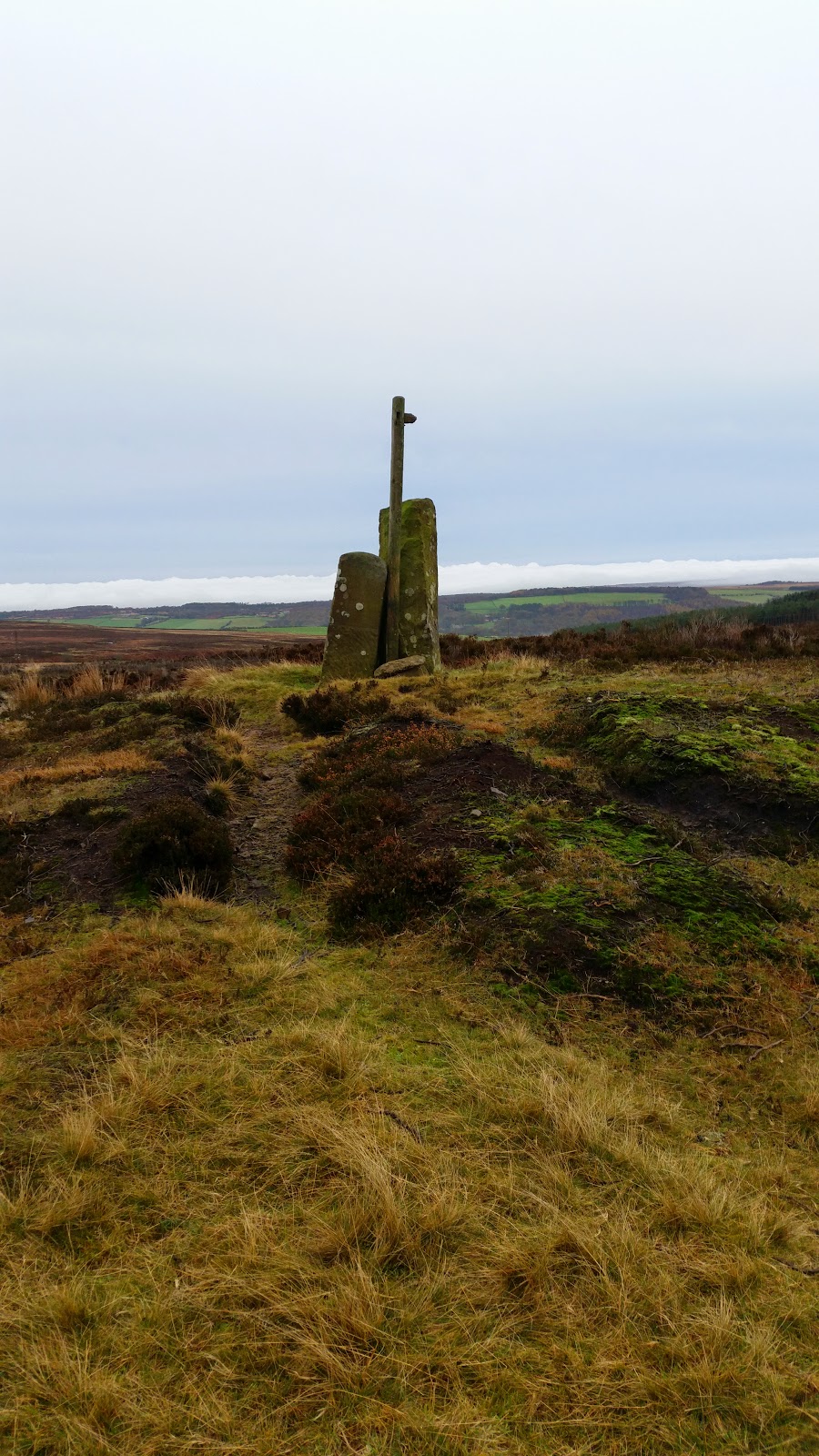 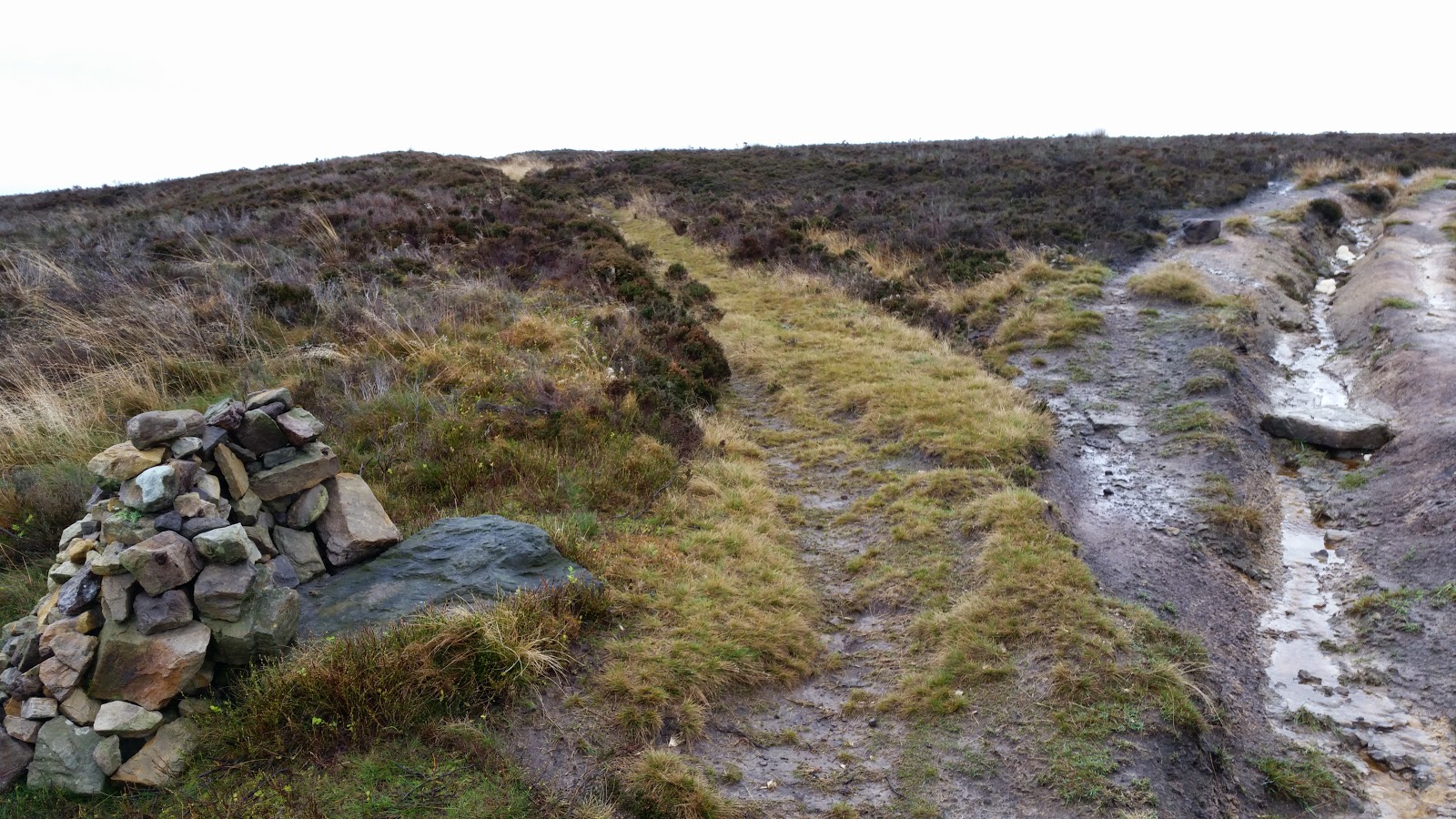 We parked up at a pull-in/car park area just off the A169 and kitted up while peering into the mist and fog that surrounded us and deadened out the sound of the few passing cars on the A169.
It was here that (as I'd managed to do on our walk in the Black Mountain) I'd somehow managed to forget my walking socks so only had liner socks to wear in my boots, great!  Unlike our Welsh walk there were no shops to pop in to and buy new socks so I had to lace my boots up a little more tightly than I'd normally do and get on with it.

Not wanting to hang around too long as it was hovering around 4C we had a quick check of the map and headed off across the A169 to join the well rutted, muddy, track that we'd stay on for the first 3.6 miles along Whinstone Ridge and past the first 2 crosses (York and Ann's) before reaching a trig point a Louven Howe (299m) which would represent the highest point of the days' walk.

Following a week or so of heavy rain we expected the ground to be hard (or should that be soft) going but in places it made for really slow going as we had to pick our way through mud, bog and swampy patches with visibility generally very poor in the mist - so much so that it was only until we crossed into the woods at around 6 miles that we could see them despite walking 50 meters or so off the wooded edge for a good few miles! 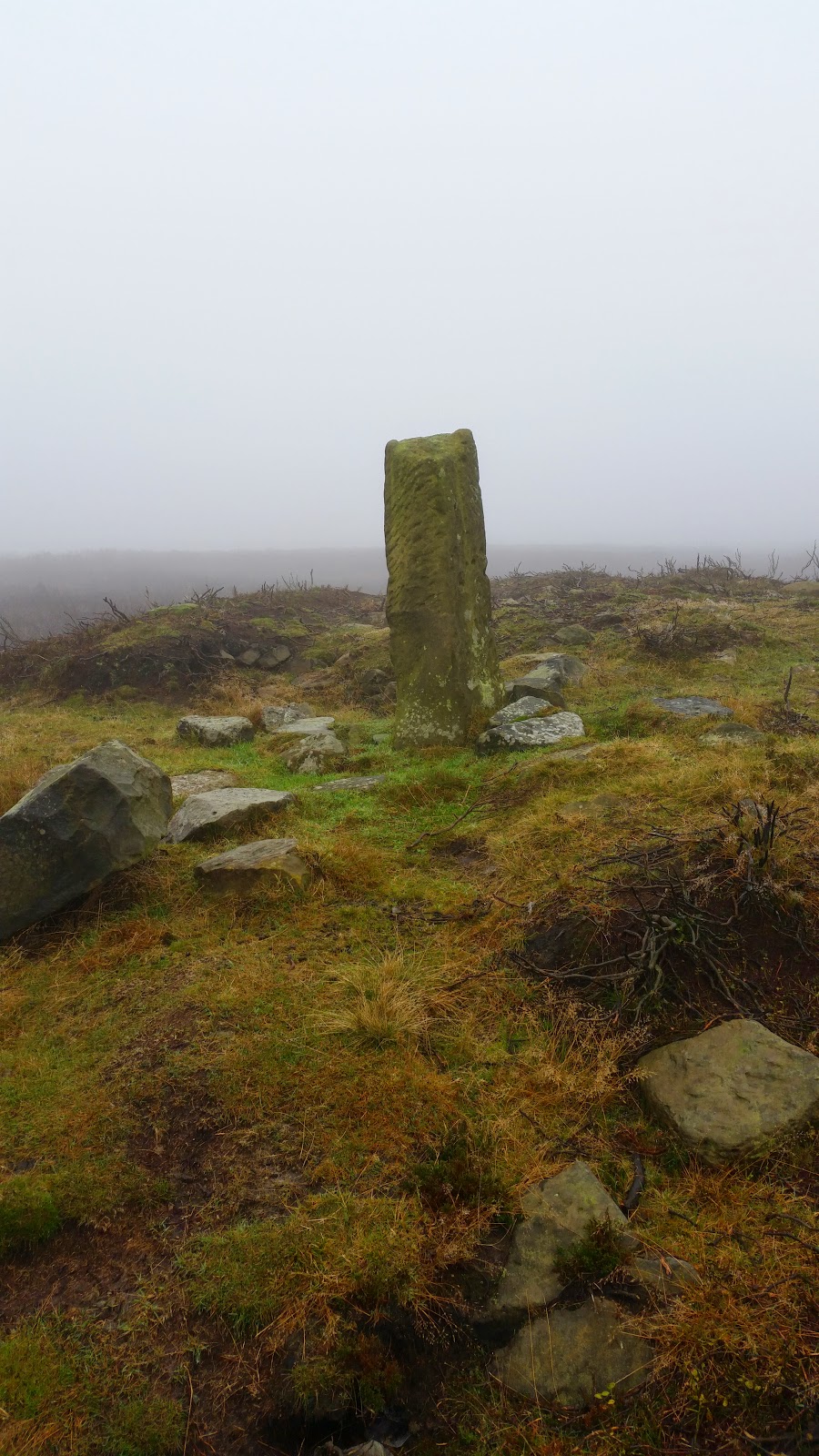 On reaching the trig point and from Louven Howe we headed in a more Northerly direction and followed the small but rapidly flowing Blea Hill Beck as it runs along the side of the wooded Pike Hill.

As we were off a main track and on to bridal way the going was much harder here and it felt like it took ages to cover the 2.5 miles to the path junction near Shooting House Rig where we'd turn due West and head along the northerly side of the woods and up towards Old May Beck. 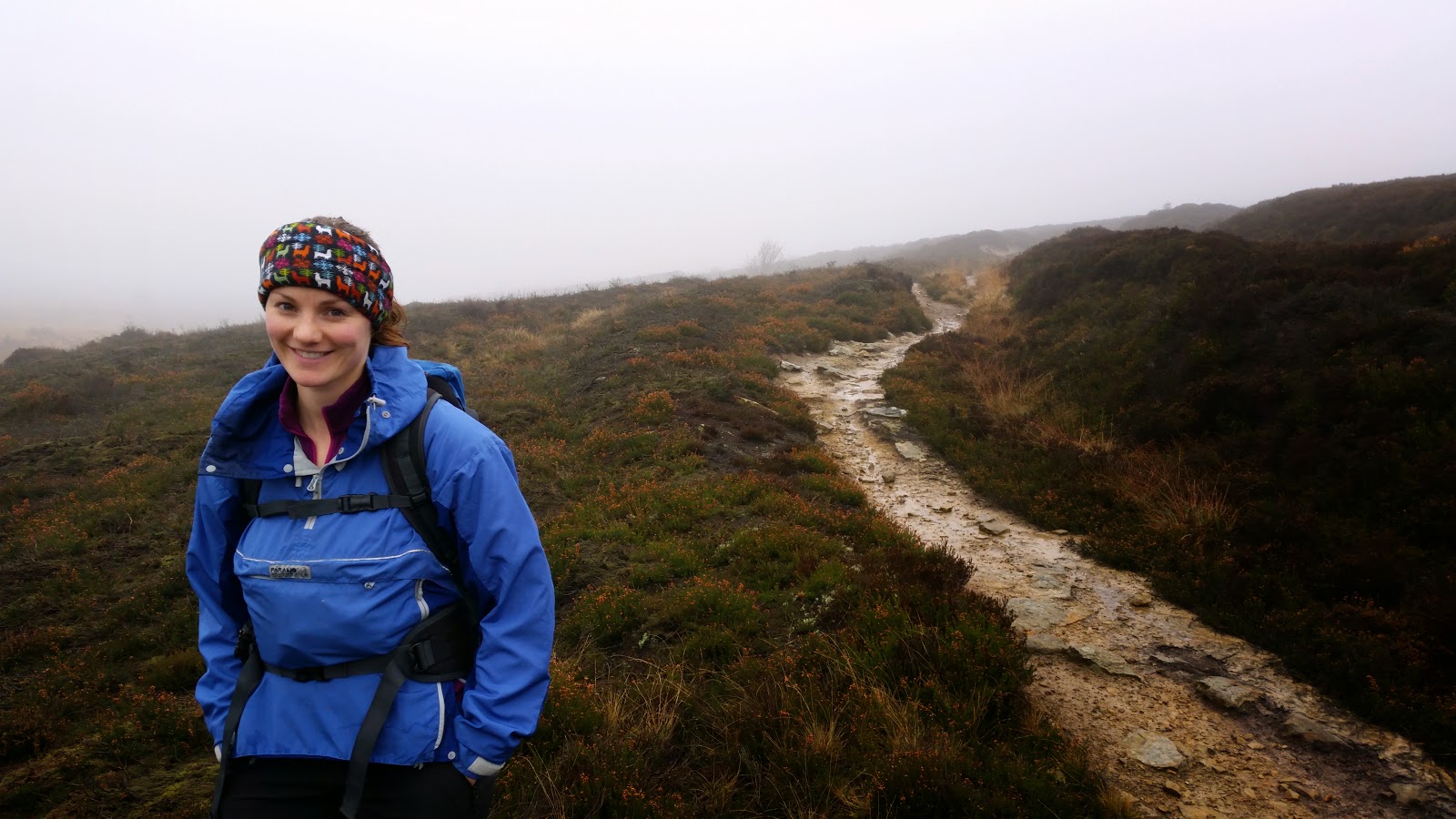 After the short descent through the heather (which when wet is quite slippery) we reached the car park at Old May Beck and decided to stop for lunch - I'd forgotten just how amazing the Jet Boil is and as we had hot coffee and pasta it was nice to just sit for a while and take in the surroundings.

So with two thirds of the walk completed we picked a slightly different route back to the car from the one originally uploaded to my Garmin and available on TrailZilla - not by much, we opted to stay in the woods a bit more from Foss Farm and then re-join the main track at the North-Western edge of the woods past Flass Brow.

The wooded climb from our lunch spot up to Foss Farm helped to get the blood pumping and warm us up again after stopping but once out of the woods and past Foss farm the track was very muddy due both to the rain and the cows walking along the path!

We entered the woods again at the edge of Foss Plantation and there was a short section between bridal way/tracks that passed through a very dense section of pine trees and in the mist (not shown too well in the above picture) it looked like something from the Blair Witch Project film!  But the going was generally good and we made decent time back to the edge of the woods, stopping to chat to a few "hunt" riders and watch the hounds running around before heading across open moorland again for a short way before joining the main track that would take us back to the car. 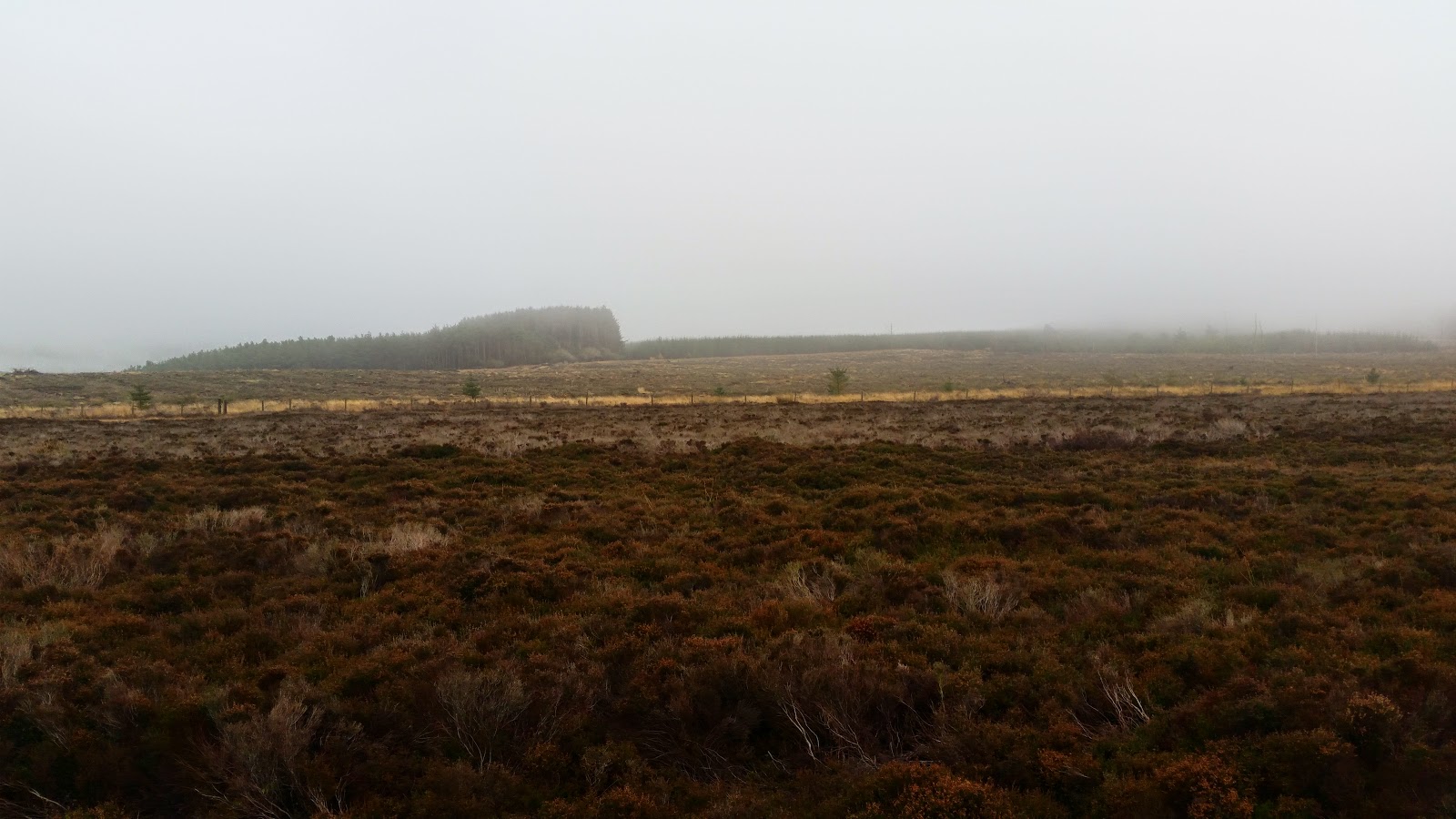 So how did we do?
Well we covered 10.36 miles and averaged 2.36 mph and both felt good - no unreasonable aches or pains - and felt a bit more positive for the challenge to come.  And my feet?!  They were fine, I think that its mainly down to having a great pair of boots (Meindl Burma Pro) and some equally good inserts (Sorbothane full strike).

The more immediate challenge now is to keep up the training and increase the walks bit by bit - so back to the computer and map to plan the next one...