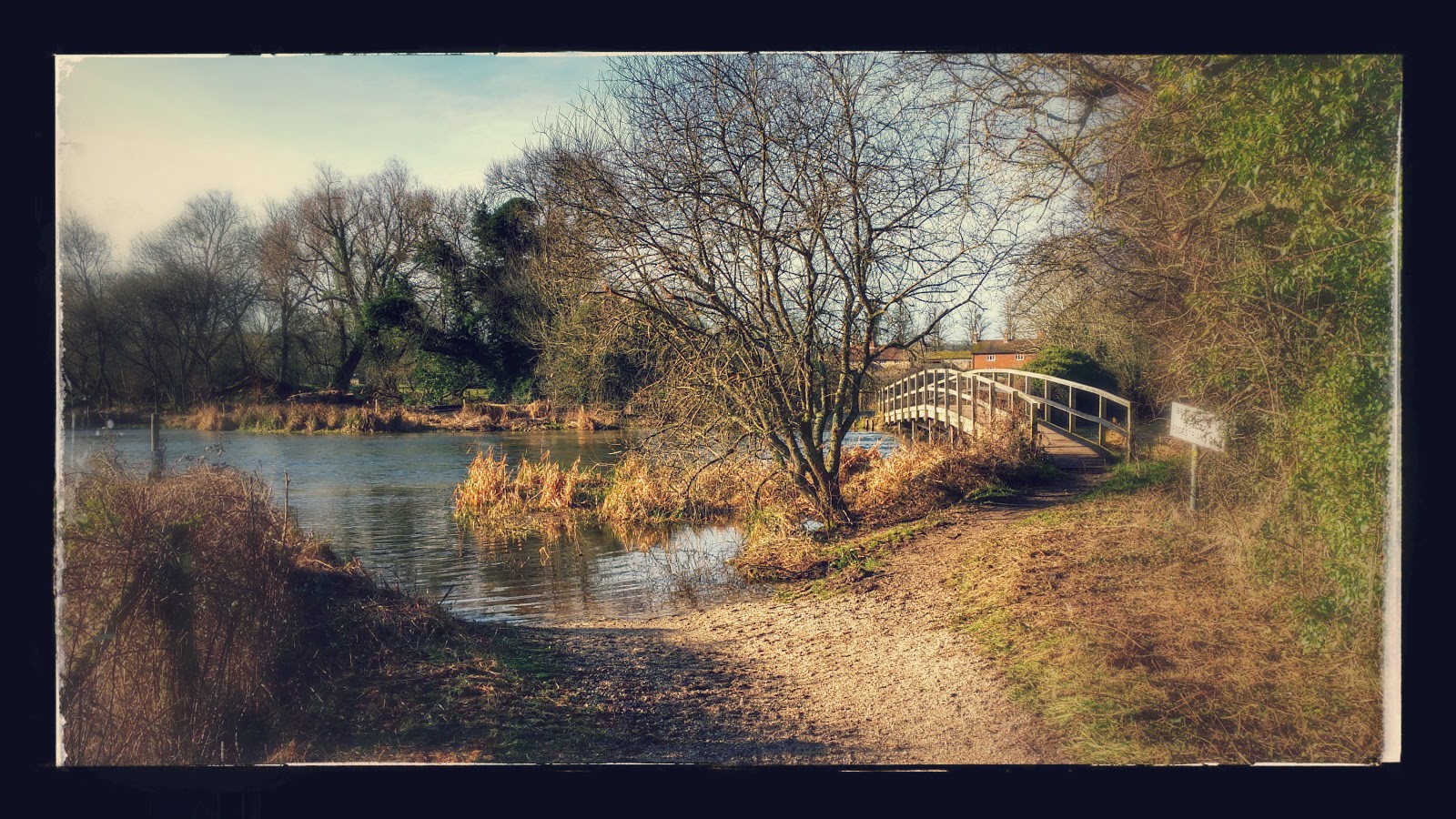 With our last training walk (not counting the short Test Way trip - here) on the Oxdrove Way totalling just over 20 miles (view the post here) the plan for training walk #3 was to increase the distance by around 5 miles and, if possible, maintain of improve on the average speed.

Deciding on a route for this walk presented a few challenges as my parents were, again, looking after Isabelle which meant that my initial route 25 mile along the Itchen Way from Fair Oak to Hinton Ampner had to be put to one side as logistically it wouldn't work.

As mentioned in a previous post I now use View Ranger for my online route planning (backed up by a good old OS map spread out on the table!) and have moved from Trail Zilla for 2 main reasons;


I finally settled on a 24 mile circular route starting (as we had with our 2nd training walk) from the Bear & Ragged Staff pub (Michelmersh, nr Romsey) using parts of the Monarch's Way and Clarendon Way.

After dropping Isabelle off at my parents (and a quick trip back again to pick up my socks that I'd forgotten, again!), Saturday morning saw us parked up outside the Bear & Ragged Staff pub and were on the small road up towards Michelmersh by 8:30am - the weather was set to be clear and fairly cool so perfect conditions for walking all day!

Once through the small village of Michelmersh we turned off the road at the church and on to the Monarch's way footpath that passes through the church yard and across the fields, passing Manor Farm and Hall Place before reaching the village of Braishfield at around 3.5 miles.

From Braishfield the route follows the road for a slightly tedious 3 miles; through Puknall, Lower and Upper Slackstead before finally getting back onto the path, just past the small church, at Farley Farm.

After passing through the farm and the small airfield we entered Parnholt Woods where we followed the main path downhill before joining the footpath in Luke copse and linking up with the Clarendon Way nr Charlwod Copse.

*****NOTE - the route we should have taken here runs parallel to this and passes the edge of Hanging Wood and through Luke Copse to join the Clarendon Way nr Charlwood Copse.  Our route required a slight detour, off path, to correct this*****

So, with 9 miles under our belts and the huge house surrounded by Charlwood Copse behind us we decided to stop for a hot drink and some "Whole 30" compliant (see below) snacks, as this was the first of our two planned stops we set a time limit of 15 minutes.  We'd learn't the hard way from the last trip and brought the Jet Boil with us as this is far more efficient than the Trangia at boiling water for tea.
"Whole 30" - what's that all about then?

Having dabbled with (and written a little about) Paleo/Primal eating we'd decided that, after 6-9 months (since Isabelle was born) of fairly poor eating and a little too much weight gain, we'd get back in to the Primal (Paleo is very rigid) way of eating and would start the year by doing a Whole 30.

Essentially this is 30 days of very, very strict Paleo - no diary, grains, gluten, alcohol(!), sugar or processed food - read the full rules here - the idea is that this makes you focus on the right, healthy, food choices by removing all the "cheats" that we're so used to using for energy and to stave off hunger.

It's really difficult to start but, providing you're willing to put the effort in, after a few days the craving for sugar and "quick and easy" foods disappears and I've felt more alert and had more energy than I have for ages - and the weight has dropped off despite minimal extra exercise.

It does however mean that trail snacks and "quick" foods need a bit more planning as you can't just nip to the shop and grab a Snickers bar for the trip!  Luckily for me Donna has a plethora of Paleo cooking books and is always coming up with new tasty but "allowed" snacks for us to take.  On this walk, owing to the anticipated 2000+ calorie burn, we took;


After lunch we headed out across a fairly open stretch between Ashley and King's Somborne - which although not hugely high was fairly chilly in the breeze - before dropping down into the village of King's Somborne itself.

The route we took passed straight through King's Somborne and then, after climbing up out of the village on a small back road, we crossed the Test Way next to the cement works and from here continued on the Clarendon Way, over two foot bridges crossing the River Test, before reaching Houghton (pronounced "How-tun" much to Donna's annoyance as the similarly spelt Broughton is pronounced "Braw-tun" - gotta love English eh!) and Houghton Drayton and then out across the fields again roughly following the course of Wallop Brook before reaching the slightly larger village of Broughton.

Leaving Broughton (and thanks to Whole 30 and time limits having to resist the temptation to stop at my mate's excellent pub, The Tally Ho) we met the first and only real hill of the walk, climbing from 40m up to the trig point at 138m at the Nature Reserve of Broughton Down.
We'd originally planned this to be our lunch stop but as we'd only covered 15.6 miles and in quicker time than expected (it was 20 past 1 and we didn't really want to stop much before 2pm) we decided to carry on and look for a suitable place to stop possibly around the disused pits and small coppice just outside of West Tytherley.


Lunch at last!
With just over 17 miles under our boots, covered in just under 6 hours, we stopped jsut outside of West Tytherley in the coppice that we'd "aimed" for.

We'd allocated 30 minutes for our lunch stop and once a suitable spot was found in the small copse just off the path, sheltered from the wind by a large fallen beech tree, we set up the Jet Boil (for coffee) and Trangia (for heating the beef stew) and tried to make the most of 30 minutes of not walking!

The hot food and drink was amazing and just what we needed to re-energise us, even if the 30 minutes passed like they'd been 5, so we packed up and headed off along the path agin to pick up a very broken and muddy track to the East of West Tytherley which runs down to the hamlet of Stony Batter and on to the slightly larger East Tytherley, passing Sopp's Farm before heading out, diagonally, across the fields before picking up the drove route marked on the 1:25k OS map as Park Pale(?).

***it's worth noting here that the diagonal route across the fields, covering nearly a mile, is not marked at all and there is no obvious route across the crops.  There are styles on all fences so the route is definitely there as marked on the map but you need to follow the map and make your way across the crops - something that feels a bit wrong to me but there are even signs warning you not to follow the field edges as its private land!**** 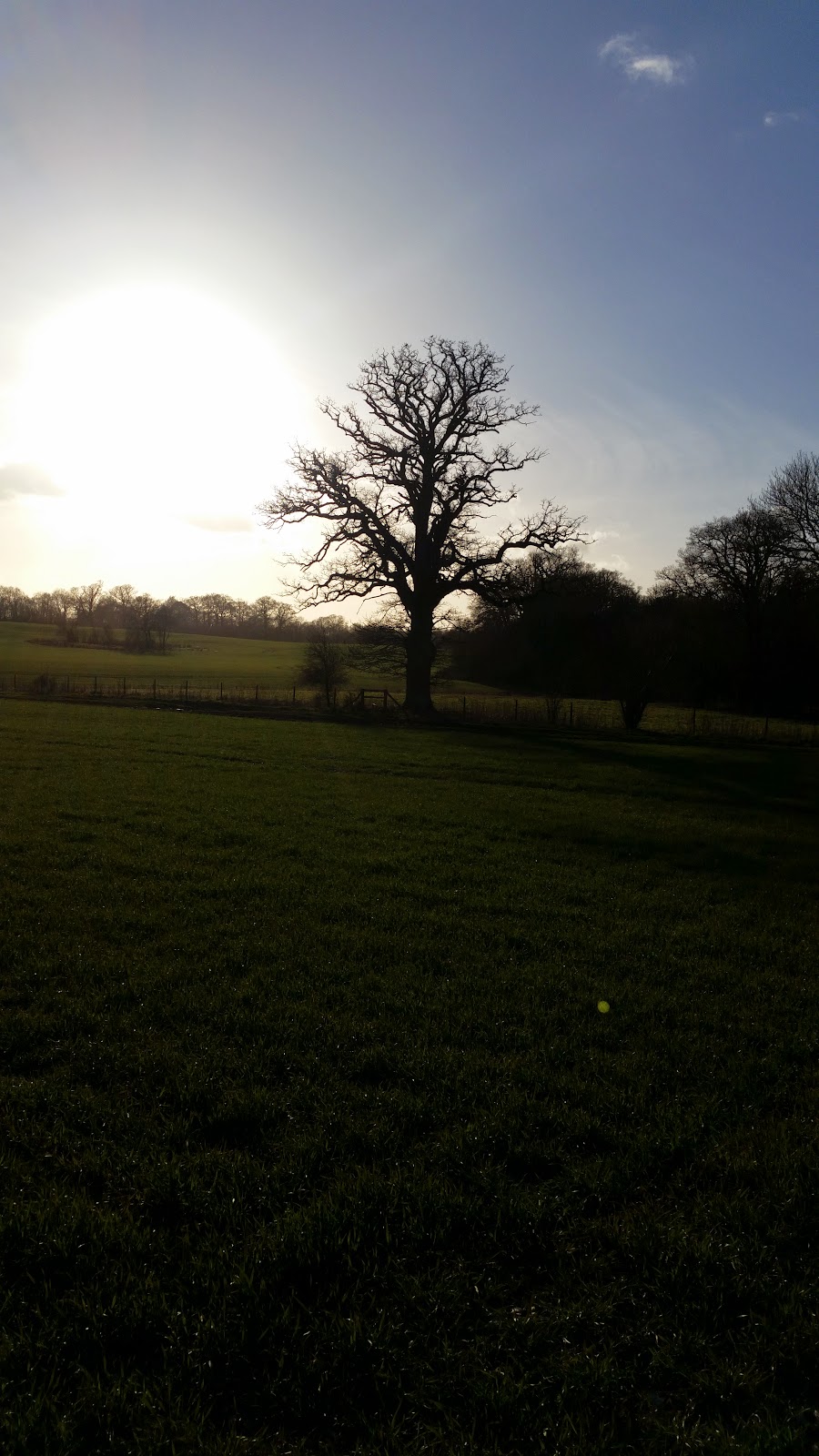 With the light just starting to drop we arrived at the road crossing point opposite The Star pub (a great place to eat and drink especially in the summer) and followed the path through their car park and out across the fields of Lockerly Hall before entering Dummer copse at just over 21 miles. 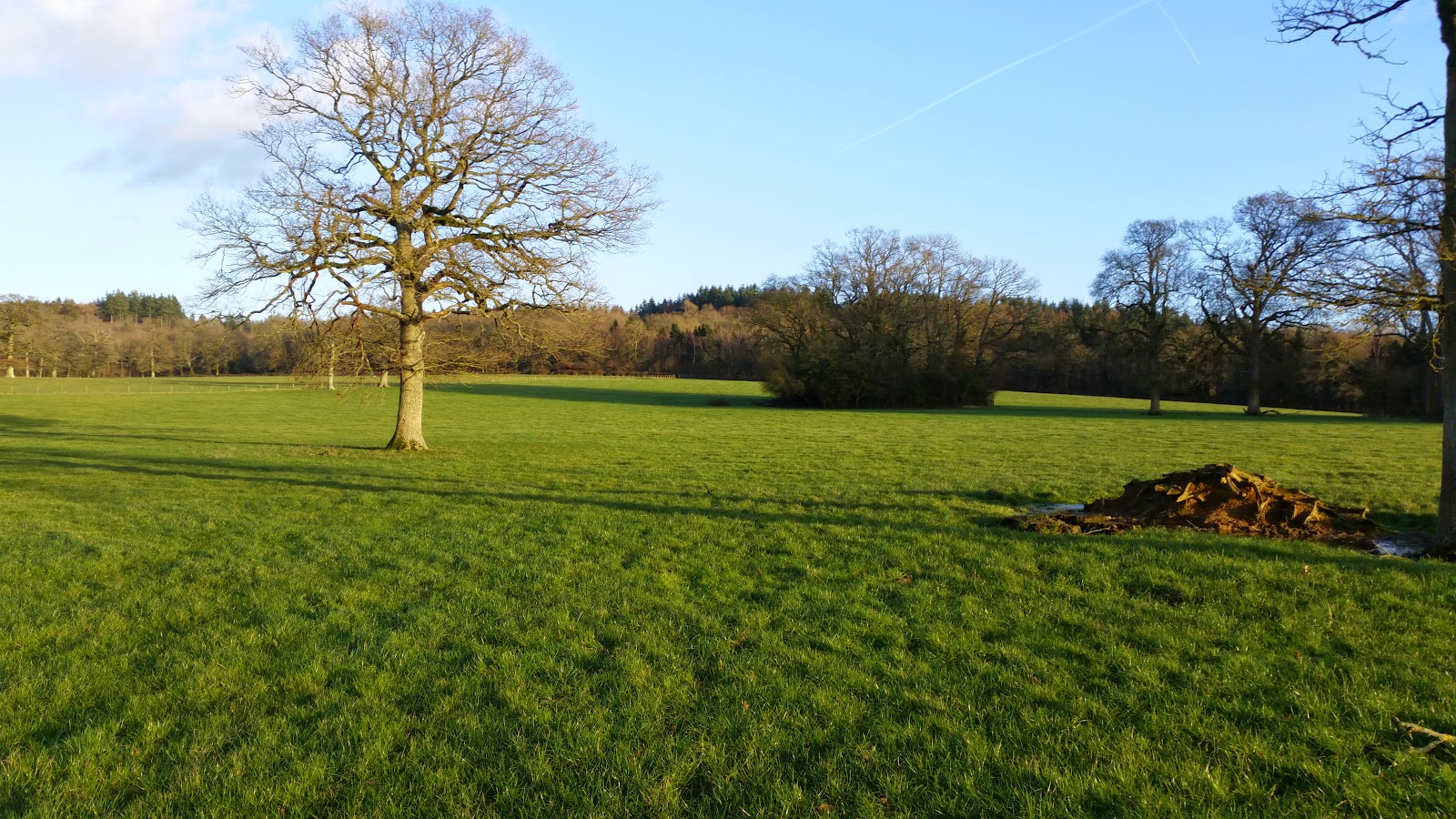 We've walked around Dummer copse and Spearywell woods many times so on reaching this point it felt like the end was in sight and with 2.5 miles (ish) to go it pretty much was!

The route from here continued through the woods, passing Cadbury Farm and crossing the road at Spearywell before crossing fields again for the final off-road stretch to Mottisfont where we then picked up the road, passing Mottisfont Abbey before arriving at the main road at Stonymarsh and following the off-road (but paved) cycle path that runs along the A3057 back to the Bear & Ragged Staff pub.

Although my knee was aching a bit and I had a twinge in my left hamstring (that would linger on whilst writing this blog 2 days later!) I was very happy with the walk; route, time, the stops and how we felt.
The next walk (ideally on the 14th Feb) is going to be of similar distance as we need to aim for trying to cover the same distance, in the same time, and feel better after doing it.  Only then can we look to increase the distance to upwards of 30 miles - so, on to the next walk!!

You can download the .gpx file and PDF info sheet (from ViewRanger) here;
Route details, recorded on ViewRanger via my GS5;

Leaving Romsey behind at 2pm on a Saturday may seem like a crazy idea when the aim is to travel to the foothills of Cadair Idris in Snowdonia National Park but there is method to my madness!
The idea was to arrive around 6pm, park the car and then head up to Llyn Cau (Lake Cau) and set up the tent for a night of Wild Camping and then set off early the next morning on a circular route to the summit of Penygadair (893m) via Craig Cau and Mynydd Moel (863m) before returning to the car and heading home!

So it was almost bang on 6pm that I pulled into the car park just off the A487 at Minffordd - unfortunately there is no ticket option for an overnight stay so paying £6 to the (very eccentric) owner of the campsite a few hundred yards down the road achieved the required parking spot for the night.

Since buying our little slice of Hayling Island, in the form of an 8x10 shed, or Beach Hut, located on the Southernmost beach, I'd talked about, thought about and planned in my head a paddle around the island - it's an island after all so perfect for a circular trip.

Initially my idea had been to paddle board around the 14 odd miles but as this would be a fairly big undertaking on a paddle board and the weather would need to be pretty much ideal (including tides) I never got further than talking about it with Tom. Then came the Kayak.....

The double kayak (a Wilderness Systems Tarpon 135t (13.5ft)) made the round the island trip much more achievable as there would be two of us paddling and we'd be far less reliant on a flat-calm sea for our trip.

So, following an aborted trip up to see family nr York I found myself with a "spare" Friday off work and, as luck would have it, the tides were just about right for an early morning start and round-trip attempt - it was…
Read more

I thought I'd take a quick break from walking and mountain related blogs and share my initial thoughts on the Boardman CXR 9.0 Cyclocross bike following today's first outing and CX style ride.

So first things first - spec.  Well you can read the full spec on the Boardman Bikes website but the headlines, for me anyway, are;

Aluminium frame - Boardman X9 alloySRAM Rival 2x11 speed groupset with hydraulic disc brakesBoardman CXR carbon CX forks with internal cabling and 15mm Thru-AxleOh, and it's £1,250!!! This is the entry model in the CXR / Elite line up which basically means that you can't buy this model from Halfords - it needs to come from Boardman directly (online or in-store).  It's slightly frustrating as the "in Halfords" top end Hybrid (Hybrid Pro) has the X9 alloy frame (and it's great!) but the equivalent CX bike uses the X7 frame which is a fair bit heavier and spec is no where near as competitive - fo…
Read more