June 20, 2015
Around 10am, after Donna's parents had set off on their drive back to Yorkshire, we headed out on the Glen Road from Newtonmore with my parents aiming to take Isabelle and Monty for a walk along the well graded track running first to the township then on into the valley below Creag Liath which we'd walked on the previous day.

We only really had a "there and back" walk in mind, planning on turning back before the track started to gain height, but on reaching the township I commented that the craggy sides of Creag nan Abhag looked inviting and that I'd like to walk over up to the summit at some point.... which lead to Donna and I setting off with Monty towards the craggy South face of Creag nan Abhag while my parents took the return path back to the car with Isabelle sleeping in the buggy (it's a hard life!).

We opted for a route up the mountain that was the most direct route, almost due north up the South face, the grass and heather quickly gave way to rocky ground and we made fairly good going up to the main section of crags at around 500m. 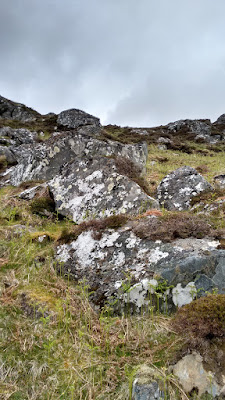 On reaching the main crag section Monty scampered up ahead of us and I found myself wishing more than once for his 4 legs and low centre of gravity!

The scrambling wasn't overly complex but there were points on the top section were we had to grab handfuls of wiry heather for handholds as the ground was lose and there were no secure rocks to trust.

Once up onto the top of Creag nan Abhag (589m) the ground evened out and flattened and the views, thanks to the sudden clearing of earlier cloud and mist, were lovely.

We had a choice of routes down but, as we were planning on meeting my parents back at the car, opted for a SE path towards the old fort as this missed out the boggy waterlogged section to the West of the woods and saved time over taking an Easterly route to the river and following this back to the car park. 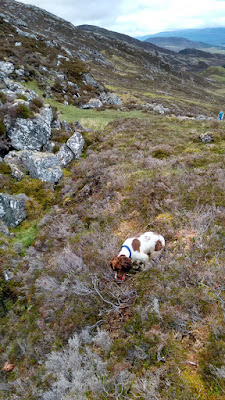 The going was fairly easy but the ground became wetter towards the forest and fence line but on reaching the stones that marked out some of the old fort and the river the ground dried out and a path was evident that we followed until reaching the fence line and gate just next to the small bridge near the car park. 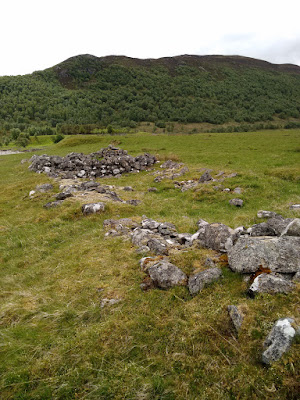 Conveniently we met up with my parents and Isabelle (who'd woken up finally) on the bridge and let Monty have a quick dip - you can't really keep a spaniel out of the water can you!

You can download the .gpx file recorded on my Forerunner 920XT here;

Garmin Connect route map of the walk, recorded on my Garmin Forerunner 920XT