Showing posts from May, 2016
Show All

Ok, ok, I know I said the Spin (below) was "the" bike but as anyone who rides bikes and has that two wheeled bug will know; "there's always room for one more!"

But seriously though this wasn't a knee jerk reaction to seeing one in a shop window (although Donna might say otherwise), there was a chain of events leading to this......

It started with a Shimano Dynamic bike fit from Service de Velo - something that I'd been meaning to get done for ages and following some very good review of a new bike shop in nearby Botley (Service de Velo run by Mark Alexander) I decided to book in and get fitted.

2 x 3hr sessions later (the 1st of which I paid for and the 2nd Mark insisted we do, FOC, to get things right) I left knowing a few things;

my Spin set up is aggressive, but comfortable for me, but riding it through an Ironman "may" not be my best optionmy left leg is slightly shorter than my right (on the bike) and a 3mm shim in my left pedal sorts this…
Post a comment
Location: Hampshire, UK
Read more 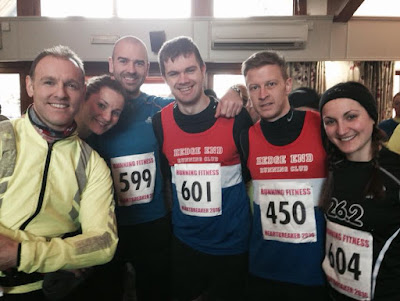 Entering a half marathon seemed like a good idea when it was months away....  "sure" I said when Donna asked if I wanted to join her on a 13ish mile run through the New Forest, a race called the "heartbreaker" due both to the expected temperature at the end of Feb and the hills you have to run up and down during the race.
But, it was going to be good Ironman training so why not, sign me up, I'll have loads of time to train for it!

By mid Feb however thing's weren't looking as rosy as I'd hoped on the training front.  A strained back in the first week of Jan 2016 meant nearly 2 weeks of total rest just as I was getting back into training after the Christmas break - despite the horrible weather we'd been having - and although a couple of visits to the sports massage clinic helped I didn't really start running again until the beginning of Feb and even then it was only 5-10k during lunch breaks at work.