May 02, 2016
Entering a half marathon seemed like a good idea when it was months away....  "sure" I said when Donna asked if I wanted to join her on a 13ish mile run through the New Forest, a race called the "heartbreaker" due both to the expected temperature at the end of Feb and the hills you have to run up and down during the race.
But, it was going to be good Ironman training so why not, sign me up, I'll have loads of time to train for it!

By mid Feb however thing's weren't looking as rosy as I'd hoped on the training front.  A strained back in the first week of Jan 2016 meant nearly 2 weeks of total rest just as I was getting back into training after the Christmas break - despite the horrible weather we'd been having - and although a couple of visits to the sports massage clinic helped I didn't really start running again until the beginning of Feb and even then it was only 5-10k during lunch breaks at work.

On the up side I'd started running with a chap from work and found this to be much better motivation than simply going out on my own - so every cloud and all that!

So, the morning of the 28th Feb 2016 arrived - cold, very cold, but thankfully dry and we headed out into the New Forest to register and to try not to think about all the reasons the race is called "Heartbreaker"!

There were a fair few "Hedgies" (Hedge End Running Club) running and the obligatory selfies were taken - it's these pre-race moments when being part of a club really helps, the camaraderie goes a long way to remove the nerves.

One of the guys from the Triathlon club, Martin, was planning to run the full marathon (both the half and full events were being held on the same day, the latter being more laps of the same course) but due to injury had stepped down to running the half and agreed to run along with Donna and I as we thought we'd be about the same pace.

I know the New Forest fairly well but I'd forgotten to read the route fully and equate it with the trails and paths I know so whilst I was prepared for a hilly run, I wasn't prepared for quite how hilly it would be.... and the worst part of the Heartbreaker (for me anyway) is the walk down to the bottom of the hill outside of Sandy Balls (the holiday park nr Fordingbridge in the New Forest) for the start - which see's you run back up the very same hill and on, past the holiday camp, and on up along the side of the road to the start of the off-road section accessed from the car park at the top of Godshill ridge.

There are some fairly decent hills from the car park through Pitts Wood Inclosure through to Hampton Ridge and Martyn and I decided to run on ahead of Donna (at her request!) to complete the 2 "there and back" runs of the ridge path.


The return leg felt very welcome after the hilly, and windy, ridge path and the last downhill section on the road allowed Martyn and I to push the pace up slightly, from our average of 9m/mile, to 8:44 and then the last mile at 7:04m/mile - adrenaline has a lot to answer for! 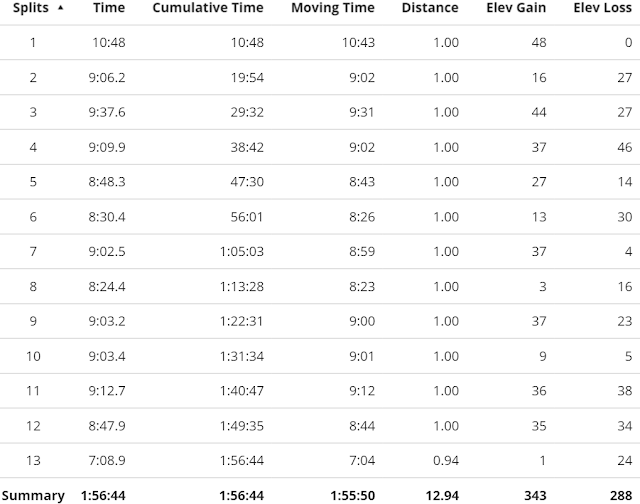 Crossing the finish line under the 2hr mark was a time that I hadn't hoped or thought possible for my first half - especially considering the terrain - and I have Martyn to thank for dragging me round, without someone else running alongside to take my mind off the miles and keep my going my pace would have dropped for sure!