At 1309m above sea level, Ben Macdui is the 2nd highest peak in the UK, losing out to Ben Nevis by 36m, but is also largely unknown to the majority of people - "who cares about the 2nd highest?"
In a world where being 1st is unfortunately, but usually, far more important than anything else, the 2nd highest mountain in the UK doesn't really stand too much of a chance, especially when you have to walk around 10 miles in total to get to the summit!

But, that does mean that there are likely to be far less people on/around it  - a big tick in the box for me!

We'd attempted Ben Macdui before but conditions (wind gusting well into the 90's) put us off, quite spectacularly in fact when a particularly strong gust of wind picked Donna up and deposited her 10 meters or so back along the path forcing us to abandon the walk - a sensible call!

After talking to a number of people we'd picked a slightly different route to the summit, via the Fiacaill Ridge, and the "traditional" route back down again to the start/finish point at the top car park of Cairngorm mountain.


The plan was to follow the path from the main ski centre car park before striking off southwards onto the smaller path that passes between Choire an t-Sneachda and Choire an Lochain before following the ride itself up onto the Fiacaill butress before topping out at around 1150m and then on to Cairn Lochain (1215m) and on past the small lochan (Lochan Buidhe) and arriving at the summit some 4-5 miles later.
Simple!


So, with the wisps of mist around us and light drizzle forcing us into waterproofs we headed off on the well maintained path from the car park and on to the smaller track into the Choire.

On leaving the main path and crossing the small stream (Allt Choire an t-Sneachda) we started to gain more height and the large boulders of the ridge became more apparent - and so did the mist!

The ridge started off well and we made good progress along it until reaching the section marked on the map as "Fiacaill Buttress" and this was where things got a little more interesting!

With visibility in some places being almost nil we spent a fair bit of time scouting around for the right route as wet rock doesn't carry the highest level of traction even with mountaineering boots on and although we had our ice axes we didn't have any rope with us for extra safety so I wasn't prepared to take any chances. 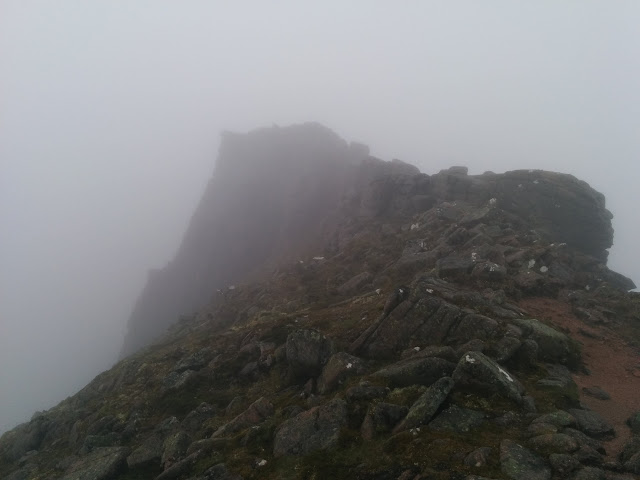 I'd imagine that on a clear day the ridge looks amazing and very intimidating as in places the drops are huge and the rock formations are quite spectacular - but we couldn't really see any of this which was both a blessing and a curse.  This particular cloud's lining was, at that point on the ride, anything but silver!

Needless to say that we made it along and up the ridge and once on top of the plateau and in sight of Cairn Lochain the sky cleared (well we were above the cloud!) and things became much more pleasant.


The walk from here is fairly straightforward - along gently sloping ground strewn with rocks and scree and past the small Lochan Buidhe before climing the last 150m or so of ascent to the summit of Ben Macdui which was, once again, in the mist - this time though the cloud did have it's silver lining back and we stopped at the trig point for the obligatory pictures and cup of team (and maybe a quick whiskey!).

The return route followed the longer and easier path back to the ski centre car park passing to the west of Choire an Lochain and on a dreary day, as it was when we walked it, it can be a bit monotonous but remembering the challenges of the path through the ridge I was glad that we didn't have to pick our way back down that to get home!

You can download the .gpx file and PDF info sheet (from ViewRanger) here;