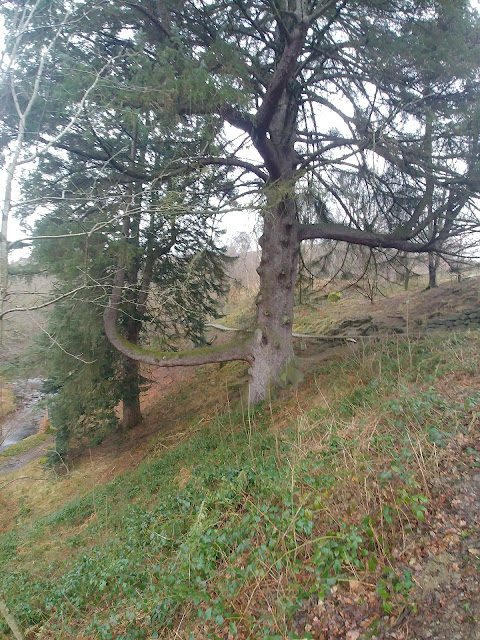 Sitting above the banks of Ullswater, to the NW of the junction of the A592 and A5901 lays the grounds of Gowbarrow Park, owned and managed by the National Trust and home to the stunning Aira Force waterfalls.

Nestled in the middle (ish) of Gowbarrow Park is Gowbarrow Fell which rises 481m above the huge expanse of Ullswater and, as the weather was pretty rubbish and along with a walk up to the falls, was to be our "target" for the day.

While not a long walk we'd decided that as Aira Force was somewhere we didn't get round to visiting last time we'd have a walk around the grounds and waterfall before heading up towards the summit of Gowbarrow Fell and then continuing the circuit back to the carpark - a walk of around 4 miles.

The grounds of Aira Force are managed by the National Trust so are well maintained as you'd expect.  There is a charge to park and it does get very busy in the summer months, but on a rainy, chilly Saturday in February there were loads of spaces in the car park and we made the most of our National Trust membership so parking was "free".

Heading up from the small visitors centre and information boards you walk through a variety of paths with well marked trees and trails before reaching the river of Aira Beck and and then the main falls themselves.

As with most of the sights you see when out walking, particularly I find in the mountains, the pictures never really do the sights themselves justice, but hopefully they give some impression of the power and force of the falls!

From the main falls we headed on up the beck to the 2nd set of falls at High Force where we consulted the map and tightened coats as the snow was starting to flutter down, before heading up and across the fields briefly and then up into Gowbarrow Park itself and on the steeper path leading up towards the "summit" of Airy Crag.

We followed the stone wall for most of the way to Airy Crag before heading off and up onto the crag top itself and the trigg point at 481m.

The last few hundred meters saw a dramatic change in the weather and terrain underfoot as the snow had started to come down with more persistence and the paths and surrounding heather were covered in snow and ice.

The wind was blowing in the cloud and blotting out the sun which earlier in the day had been struggling to come out, leaving us with a gloomy, claggy vista that took some getting used to after the glorious crisp sky of yesterday's walk on Place Fell.

On reaching the summit and trigg point we really only paused long enough for a few quick snaps (for the blog you see!) and then headed back down off the top to continue along the path on the return leg of the walk. 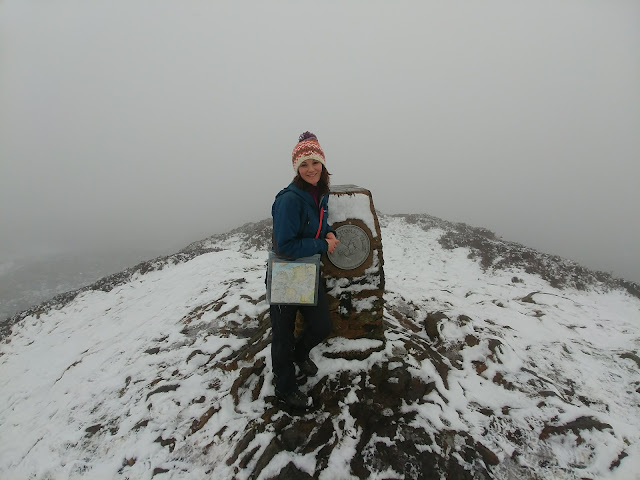 Now the eagle eyed will notice that the route plotted from my Garmin (below) and the path on an OS map don't exactly tally - that it because I may not have been paying quite as much attention as I probably should have and we wandered off in a South Easterly direction for a few hundred yards before realising and bearing back southwards - thus missing the path and forging our way across the open heathland and snow crusted grassy tufts in an effort to get back on track, which we eventually did around the area of Collier Hagg.

While not really a serious detour or one that negatively affected either the distance or difficulty of our walk it is worth pointing out that it's often on the simplest of walks that you start to take your eye off the ball and get complacent, and just because you're not up as high or as far away from the car/road there is no real reason or excuse for doing this.

Ironically, the name of this blog is Always Take a Compass - which I do, and did, I just needed to remember to use it!


The huge expanse of Ullswater was visible out of the gloom (no RAF plans flying along its length today) and this was a good bearing for us so, heading in its general direction, we followed the sheep runs down past Collier Hagg and Memorial Seat before opting for the higher path that passes Bernard Pike and Hind Crag rather than dropping completely down into the forest beyond Yew Crag for the last few hundred meters back to the car and National Trust grounds.

If you're in the area, the falls of Aira Force are well worth a visit - the NT grounds are well maintained and the information around the site is excellent, plenty to keep children engaged and the site of the falls will, for a few moments at least, keep even the most excited of them quite while they take in the power and force of the water.

There are a few longer walks from the main car park, this on (below) being the longest that's marked out but you can easily string this loop together with numerous other trails around the area to create your own walk, but do remember that compass and keep an eye on the map!