March 02, 2018
As my my wife had taken our daughter and the two dogs to her parents in Yorkshire for the week, I'd planned a day off to go and walk with Tom - nothing more than that in mind really, just a walk somewhere.

A number of ideas were bandied about; wales (again) Dartmoor, South Downs and even the Forest of Dean to look for wild boar after watching one of the episodes of Hugh's Wild West on iPlayer.

Then, and I can't really remember how I stumbled across it, I remembered about the bombing ranges in the New Forest and thought that it would be an interesting way to spend the day in an area that we both know very well.

After a lot of reading up on the bombing ranges (a really good resource for this and website generally is The New Forest Guide) I was amazed at what had been tested during WW2 and also the extent of the ranges between Godshill and Fritham - the testing of the 22,000lb "grand slam" and 12,000lb Tallboy bombs that left their mark, the latter still being visible in the form of a crater that's almost permanently full of water now.

Living so close to the forest we opted for an early start and by 07:30 we were the only car parked up in the Ashley Walk car park nr Godshill in the NW of the New Forest national park - a balmy 3C and steady 15mph easterly wind greeted us making me grateful for the full flask of tea that was buried in my rucksack. 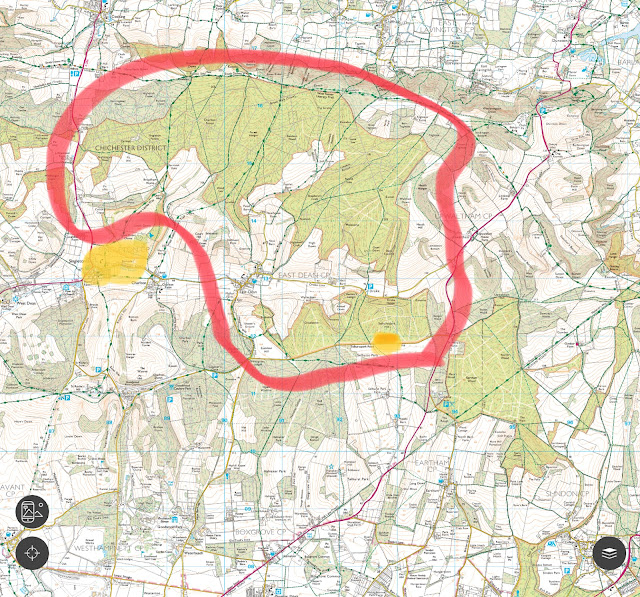 From here the plan was to walk along the main "fireroad" track and into the wooded area of Pitts Wood Inclosure where we'd find a suitable place to hide our lunch and cooking equipment before heading around the range - the idea being that it'd be much easier and more enjoyable with small "day sacks" which could be achieved if we didn't have to lug around lunch and cooking stoves. 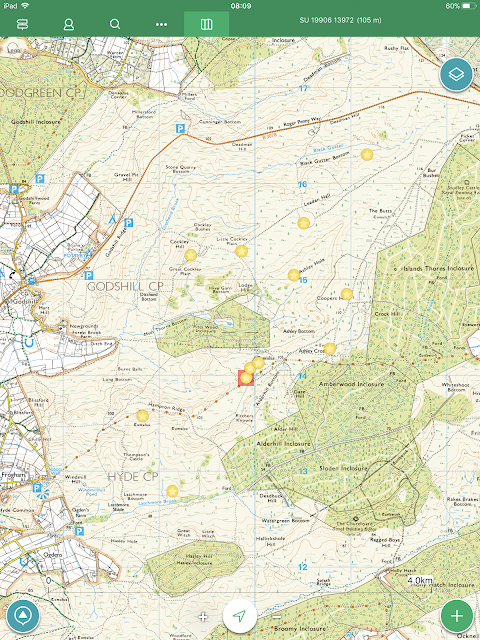 With so many "sites" that we could visit we decided on some key spots that we'd both like to visit - here's the list in the order that we planned to (and did) visit them;


Heading down towards the woods we discussed the other hopeful challenge for the day - to see some of the wild deer that roam the New Forest, ideally (for me anyway) a herd of Red Deer.  Tom had been out for a scout about earlier in the week and had seen lots of deer sign so we were hopeful of seeing some but it really all banked on the weather and the presence of dogs (and their walkers!) as a few dogs in the "wrong" place would send any deer running for the bracken. 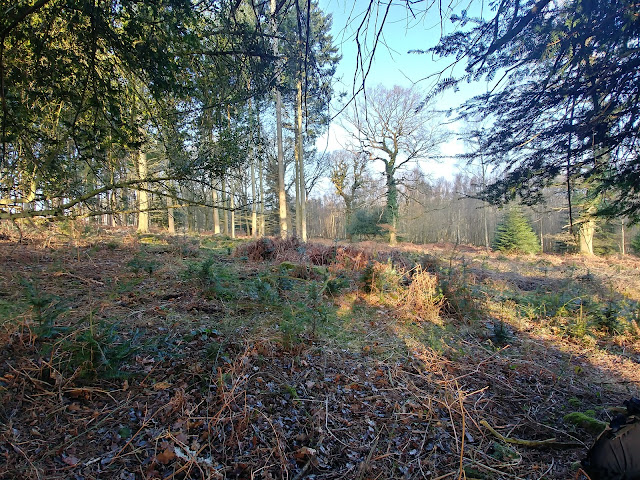 2/3 of the way through Pitts Wood Inclosure we found a good spot under an old Yew tree and set about hiding our lunch and cooking equipment in the branches of the tree, but not after we'd had a nice cup of tea courtesy of my thermos and a chance to sit and observe the wildlife for 10 minutes - I'd recently bought a new pair of binoculars (Nikon Monarch 5's) and was still amazed by their clarity and visual accuracy, perfect for spotting wildlife of any kind!

Leaving the woods we headed a few hundred meters to the Ministry of Home target, nicknamed the Sub Pens as people had no idea what they were supposed to represent.
You can only really see a large mound of earth and bracken now as the structure was so well built that they were unable to blow it up, or knock it down!  So they covered it up with earth and it's now shown on OS maps as a "tumulus" leaving only a few exposed edges showing and no real clue to what is buried underneath.

From here, on a clear day, you can see a long way and spotting the Tallboy crater and (aircraft) fragmentation targets were easy so, as the wind was vicious, we headed down to marvel at the crater and scan the horizon for signs of any deer herds moving through.

Our next stop was the directional arrow marker - used for planes to sign on (as it was illuminated at night) en route to the illuminated target which is located a kilometer or so SSE.

It's quite strange walking along the marker, for two reasons. Firstly I'd never seen or heard of it before and I've spent a lot of time in the New Forest growing up and secondly as its a true relic of the 2nd World War.  Standing there, in the early morning sun, its easy to imagine Lancasters, Mosquito's, Beaufighters and Typhoon's flying across the range to test out new ordinance and repot back - the landscape, aside from a few new gorse bushes, hasn't changed since the 1940's and it's one of the few places where you can stand still and just imagine, without having to "pretend" too much - essentially, we were looking at the same view that a WW2 Lancaster pilot or bomb aimer would have seen, albeit from slightly higher up!

After marvelling at this, fully intact relic of the war, we headed back along the path towards the observation shelter and the next set of target sites.

The observation shelter is exactly that and is fully intact.  There's some decent signage inside telling some of the story of the range during the war and my thought on standing there was how inadequate the protection seemed that was offered by the shelter! 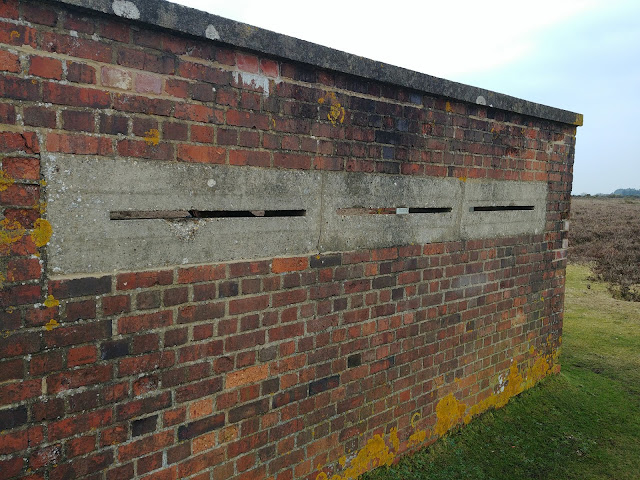 Just as we were headed away from the shelter Tom spotted a few deer, almost due south of us, near the entrance to Amberwood Inclosure.  Rather than pressing on to the next target site we decided to circle back around the deer and get upwind of them to see if we could get a better view, and possibly a picture or two.

We stalked the deer a hundred meters or so until all that separated us from them was a few large gorse bushes and you could hear them breathing and eating the green shoots of grass and gorse.

It was a herd of 10 or so young Fallow bucks (identified for us by Tom's dad, a former member of the British Deer Society), looking very impressive with their antlers which were almost full grown and ready to shed in a few months. 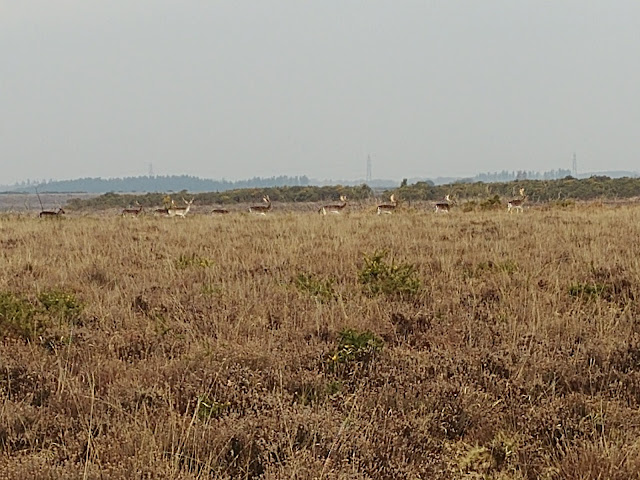 We followed them for a short time and watched them cross the open heath in the sunshine before we headed on towards the next targets - fragmentation and line.


The fragmentation target was easily spotted as a clearing amongst the gorse, easy to imagine bombs raining down and rendering this area uninhabitable for future plant growth.

We then crossed open heath to get across to the Line target - a stretch of heath that had a chalk mock-up of a railway line and was used to test air to ground weapons.  As with the directional marker, it felt slightly strange to stand here and imagine the planes coming across the heath, guns blazing, while the surrounding villages were (almost) blissfully unaware of what was going on in the middle of the forest!

From the line target we headed back to our Yew tree for lunch, an interesting past salad made by Tom which contained pretty much everything going including, much to my surprise, prawns, chorizo and chicken!

Although we only spent 5-6 hours out in the forest it was lovely to just wander around, soak up the atmosphere and let your mind drift to days gone by and challenges brought on by the threat of imminent danger, the likes of which we, in the UK anyway, don't have to worry ourselves about today.

If you have any interest in the 2nd World War or even in recent history then please have a read through the New Forest Guide website and, if you're near enough to the New Forest, then take a wander around Ashley Walk and experience it for yourself.