Sometimes the simplest plans make for the best adventures 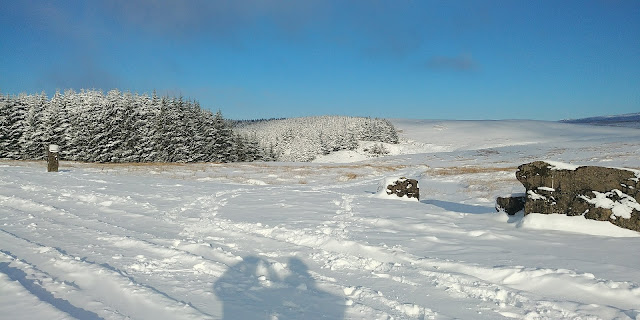 The plan was very simple; head to Wales (nr Trefil) and go for a walk, we had 3 things on our check list;


It couldn't have been much more simple than that! 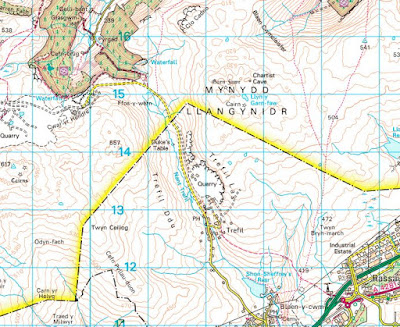 There was a bit more planning than I've initially made out, I spent a few hours googling cave systems that didn't require any form of caving equipment and that were open and didn't require a permit/license and also planning kit - I love a kit list!

The weather on our planned day wasn't ideal in the South as it was grey and overcast and there had been a fair amount of snow in Wales over the last few days, something that please me immensely as I love the mountains in the snow but made Tom slightly more dubious. 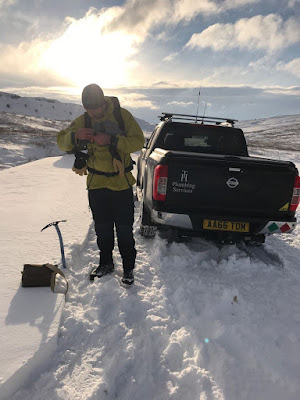 We headed off early (to beat the rush hour traffic) and by the time we'd crossed the bridge we were very happy in the choice of car, my rear wheel driven automatic would have been horrendous and the last few miles from the main A road (which was bad enough) through Trefil required full 4WD and some interesting driving on the small quarry road.

A couple of helpful locals in their, very similar, 4x4's were confident we'd get along the road and we found a pull in (well we think it was, there wasn't much to differentiate the road from the ground under all the snow!) just past the quarry and set about kitting up and taking some snaps of Tom's truck in the snow! 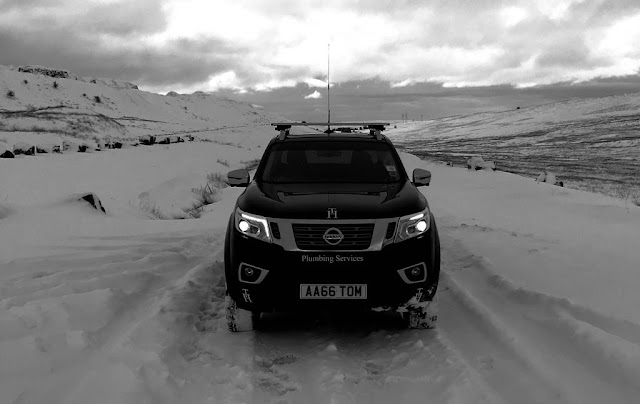 The plan from here was to walk down the road a few km's to the waterfall (Darren Ddu) and have a look about with a view to taking some photo's, then come back to the truck and swap the camera's for the climbing kit and then head off to the Chartist's cave where we'd have some lunch.

The walk to the waterfall was pretty simple, along the quarry "road", and once we got there we had a scout about to try and get a good look at the falls - which we couldn't really despite a hairy descent into the valley beneath the falls.  So, after we both decided that there was no point trying to take pictures, we headed back to the truck to get climbing gear and try to find the caves in the snow!

The walk from the truck to the cave site was, on the map, fairly simple but the waist deep snow made things a little bit more difficult and we had to take it in turns stamping out foot holes in the snow to make life easier for the person following.

With map, compass and GPS (pretty useless other than to give an approximation as there were only smooth features thanks to the deep snow) we headed off for the slowest mile I think I've ever walked!

I thought I'd done a pretty good job in navigating us but the cave wasn't instantly visible and, almost as we were considering changing plan and looking for something else that wasn't cave shaped, we saw the cave mouth jutting out of the snow behind a slight rise. 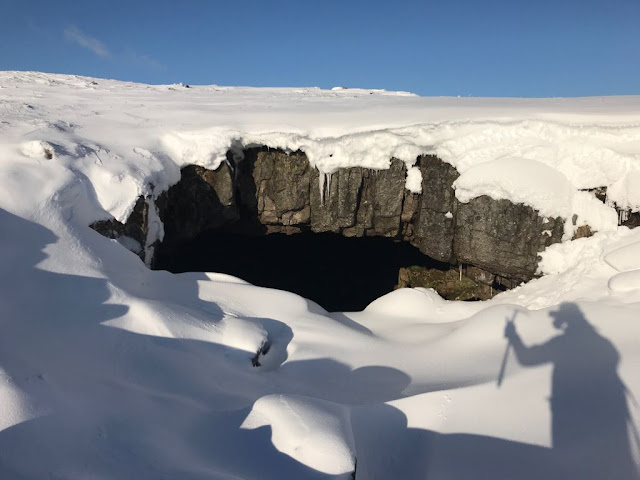 The drop into the cave was fairly easy, made a little more difficult thanks to the snow so we used this as an opportunity to put the rope down, both to assist us and also to give us some practice for our 3rd "planned" item of climbing later in the day. 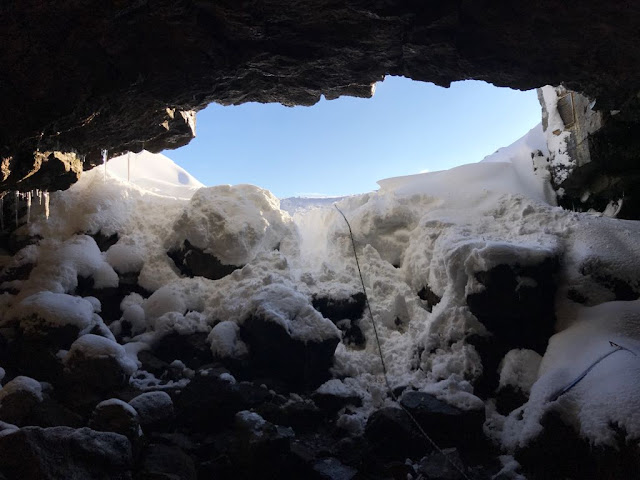 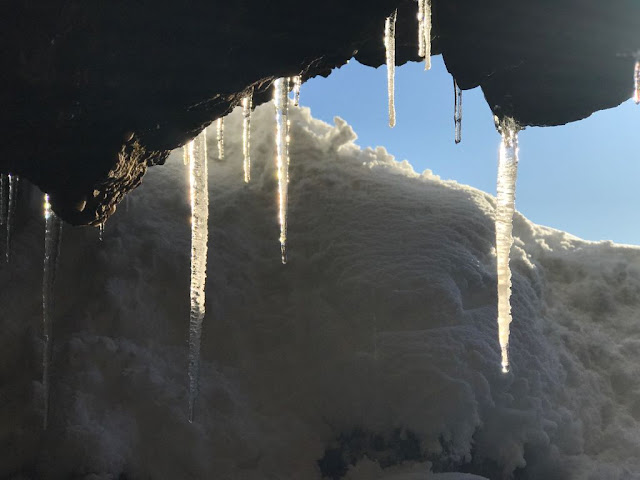 Once in the cave, which was pretty dry considering, Tom's first thought was food!  So we fired up the jetboil's and cooked soup and made tea.  There's nothing like a hot drink when you're cold and have been walking in the snow for a few hours, and to be able to sit down in the dry and out of the wind makes it even nicer; as did the discovery of my hip flask full of whiskey which allowed us a few nips just to make sure we were fully ready to go exploring the cave.


Due both to the time we had available to us and the clothing we were wearing (great for mountaineering but less so for muddy, rocky caves) we didn't explore more than 50m or so of the caves but there were some amazing sights including some hibernating/sleeping horseshoe bats which were really cool to see.

I haven't done a huge amount of caving but I'm always awed when I do and the sights you see after putting in a bit of effort are amazing and offer a very different perspective to anything you can see or experience above ground.

Next up, and last on the list, was climbing.  Now this one was going to be slightly more difficult as we'd not seen anything really worthy of climbing since we headed away from the truck (apart from the private quarry) and the presence of so much snow made things a bit more awkward. Time was also playing it's part and we didn't have time to re-locate so had to find something within a fairly close proximity. 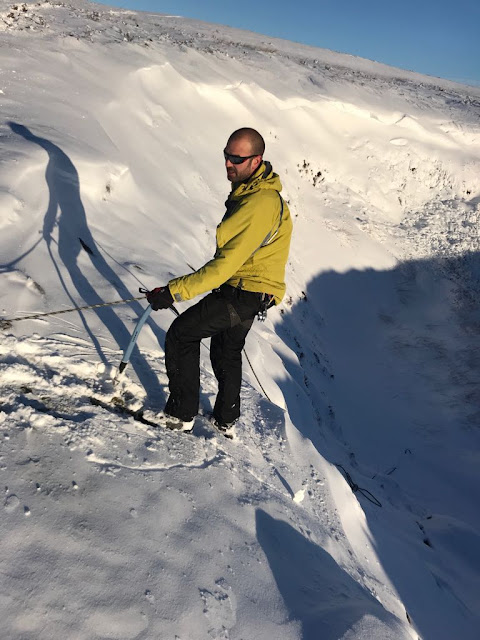 After a few km's of trudging through the snow, and almost in sight of the truck, we came across a few large sink holes and decided to rig up the ropes with the aid of a large rock and snow anchors so that we could practice abseiling down into them and climbing out with the figure of 8 devices.

It was good practice in setting ropes and safety and a good excuse to practice the snow anchors again. 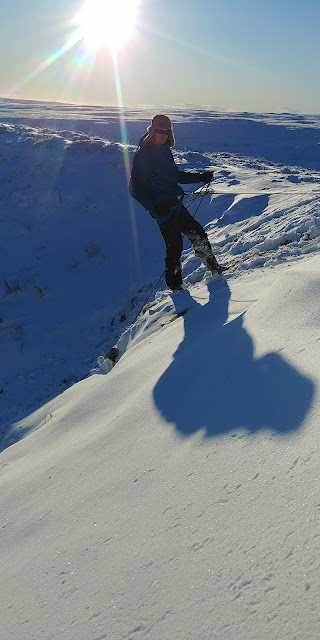 After we'd both had a few trips up and down the sink-hole, and with the sun starting to set and the temperature dropping, we packed up the ropes and headed back to the truck for a last hot drink before getting back on the road and heading back "down south". 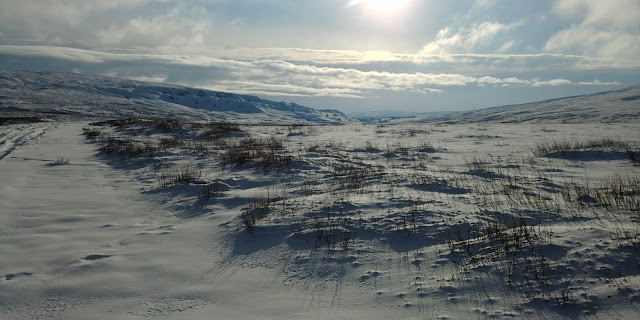 As the title says, sometimes the simplest plans really do make for the best adventures.  Get a map, get outside and enjoy, oh, and always take a compass! 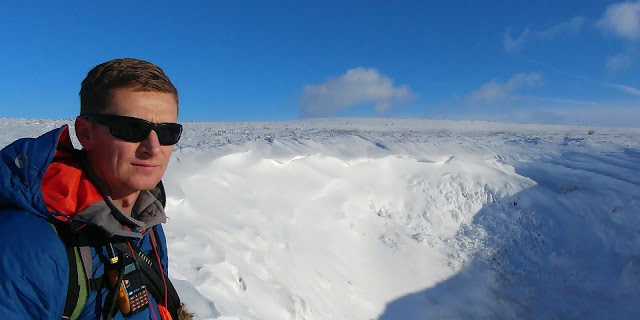